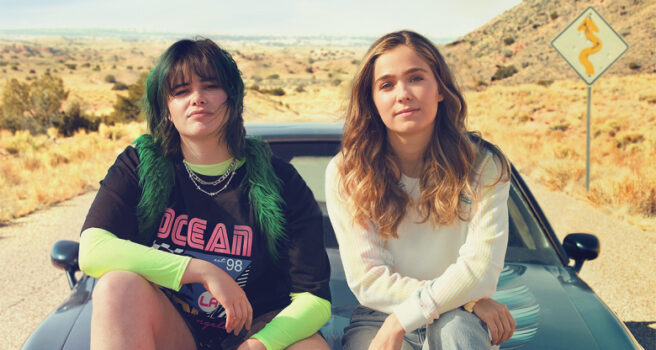 This past weekend, while in my humble dorm room eating a bag of frozen cotton candy grapes, I decided to start my 7-day free trial on HBO and watch the recently released movie Unpregnant starring Barbie Ferreira and Haley Lu Richardson. I remember quite vividly when the trailer first came out and based on my initial reaction and Twitter’s; I thought I had an idea of what type of movie I’d soon be watching; another coming of age film that’s centered around teen white girls.

And yes, it was precisely just that. But I wasn’t entirely disappointed.

In this movie, we follow 17-year-old Veronica (played by Haley lu Richardson,) as she and her friend, Bailey (played by Barbie Ferreria), travel across state lines to the nearest abortion clinic. While hundreds of miles away from home, they encounter a stalker boyfriend, a hot lesbian, Jesus-freak anti-abortionists, and a man named Bob who doesn’t brush his teeth. However, aside from its comical and light-hearted presentation, Rachel Lee Goldenberg, director of Unpregnant, addresses a very real conversation taking place today; allowing us to revisit how we view abortion and reproductive health, specifically within the U.S.

While abortion is legal in the US, it is heavily regulated in many states and for many completely inaccessible. One regulation that makes abortion inaccessible to young people is parental involvement laws. These laws can require that parents offer consent (if one’s a minor) for the procedure to be done. This is the dilemma Veronica’s character must overcome.

As a 17-year-old in Missouri, Veronica is required to have parental consent to obtain an abortion. However, as expected, there is hesitancy with revealing these details to her very religious Christian parents. Requiring minors to disclose such personal information not only breaks patient and doctor confidentiality but could also put many teen’s lives at risk. In a study lead by Stanley K. Henshaw and Kathryn Kost, it was reported that 22% of teens who refused to disclose their abortion to their parents did so out of fear of being kicked out, with more than 8% fearing physical abuse. For many teens, parental involvement can significantly impact their livelihood and overall do more harm than good. Although Veronica’s character doesn’t seem to be at risk of the outcomes listed above, she still expresses valid concern about this information getting out and is willing to travel three states away just to avoid it.

Unpregnant also forces us to recognize the amount of misinformation that’s been spread concerning abortions. In an intense car chase scene where Veronica and Bailey are being followed and harassed by an anti-abortionist, he makes the very ludicrous and false claim that having an abortion could result in one not being able to get pregnant in the future. To which Veronica responds:

“THAT’S NOT TRUE! I GOOGLED IT! AND, FRANKLY, THAT’S A VERY PROBLEMATIC FALSEHOOD TO BE SPREADING!

While we may laugh at the scene’s ridiculous nature, the dialogue isn’t too far from reality. Growing up as a young girl in the bible belt south, the slight whisper of the word “abortion” was enough to make people think that you and your entire bloodline were Satan’s bitch. It was THE dirty word, and if the religious fear-mongering tactics did not affect you, then the painful description of the procedure and the myths concerning its safety would. Unpregnant takes all these misconceptions and tells them and their followers to pretty much fuck off.

In January of 2016, Vox polled 1,060 Americans on their knowledge surrounding abortion, and without surprise, there was a lot of uncertainty, some not even knowing whether or not those with an actual medical license perform the procedure. Abortions are one of the most common procedures within the United States. Statistics show that 1 in 4 women will have or have had an abortion in their lifetime; this doesn’t take into account non-binary individuals or trans people, which could open a whole other discussion surround access and reproductive health. The immense lack of reliable information being spread about abortions does nothing but aid in the panic and dismay surrounding the topic. Goldberg does a great job at briefly stating this message without ever losing the comedic value of the story.

However, her dragging doesn’t end there.

Once the characters finally arrive at the New Mexico abortion clinic, a montage of scenes accompanied by a voiceover, explains what happens before, during, and after the procedure. This is all done with quite a tranquil aura. This scene was especially important because it gives allows viewers to reimagine abortion and the images many associate with it. Because of this moment, we can envision abortion as we should any other medical procedure; safe, practical, and accessible. We no longer have to be afraid of what was once seen as a one-way ticket to hell.

Unpregnant is not the first movie to discuss abortion and the lack of access; however, what makes it stand out is the tone surrounding the topic. We’re given a character who chooses to get an abortion, is completely aware of her choice, and executes that choice without regret nor shame. It completely differs from the stories we are usually fed. Although all stories involving people’s experience with having an abortion deserve to be told, I will say that it is refreshing to see a character stand firm in their decision and see it as a positive thing rather than negative. The beauty of choice is further emphasized whether we acknowledge how the choice Veronica made is not the choice her mother would’ve made for herself nor her sister, and that is okay. For some people, abortion is the last option, and for others, it isn’t; but to make that decision for yourself and decide whether or not it is for you is a right we all are deserving of, and Unpregnant tells us just that.