We are the Great American Virtue 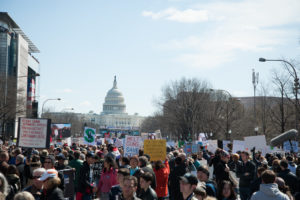 In a piece for The Federalist, David Harsanyi argued that “chanting crowds of emotionally charged protesters aren’t exhibiting any great American virtue.” To Harsanyi, protests serve no purpose as they rarely lead to concrete policy change. He argues that March For Our Lives, specifically, “undermines” the purpose of our government by challenging an unalienable right. I do not agree. Youth activism and protest is a great American virtue. The March for Our Lives was organized by teenagers, with the DC March alone supporting over 800,000 attendants. The young people who were part of this march are an incredible example of civic responsibility.

March for Our Lives was built on a basic premise, demanding that the government listen to their needs. The same goes for Black Lives Matter and the Women’s March. Protests might not lead directly to policy change, but they do lead to cultural change. Since the Parkland shooting, support for gun control has continued to rise, from 52% to 70%. Seeing the organizers of March for Our Lives on the front page of Times magazine has a tremendous cultural impact. The Federalist claims that protesting is merely a “collective act of frustration.” It is an act of frustration, anger, and disgust towards a government who prioritizes money over the lives of its’ constituents.

Protesting, organizing, and petitioning to the government are virtues. If we undermine the power of peaceful demonstrations and assembly, it will discourage people from participating in how our society and government works. We the people are an essential part of how the United States functions. More importantly, asking for our government to take responsibility for the lack of gun control is just common sense. Most other countries we interact with have strict gun control laws to prevent tragedies like many of the ones we have.

Adherence to an outdated, unregulated, and dangerous 2nd Amendment shouldn’t be our defining American virtue. Any kind of violence towards civilians should be treated as a priority by our government, especially when the steps towards remedying the problem are so clear. The same can be said for Black Lives Matter, a movement that started because black youth were being gunned down by police at disproportionate rates. Instead of putting police on a pedestal, the government should listen to its citizens and hold the police accountable. While it is true that neither movement produced tangible policy change, it wasn’t for lack of trying. Further, Black Lives Matter was able to effectively organize and mobilize thousands of people. So much so, that it has spilled over to almost every other social justice movement, because of the strength of the message.

We should encourage actions like March for our Lives, and continue to uplift young leaders, as well as give them a space to grow. It is our government’s responsibility to act right and follow through on the fact that it works for us.