Today, I was among hundreds of students and activists who shook off our campus’ reputation for political apathy and marched toward Geisel library, UC San Diego’s central library. We were one of over 150 protests around the country to demand economic and social justice, starting with our campus communities. Together, we called for tuition free public universities, forgiveness of all student debt, an end to anti-black violence, and a fifteen dollar minimum wage for all campus and student workers. Our demands were broad because our vision for an equitable future was equally expansive. We recognize that for education to truly be a right, all students should be able to attend a college that affirms their identities and doesn’t profit off of their learning. 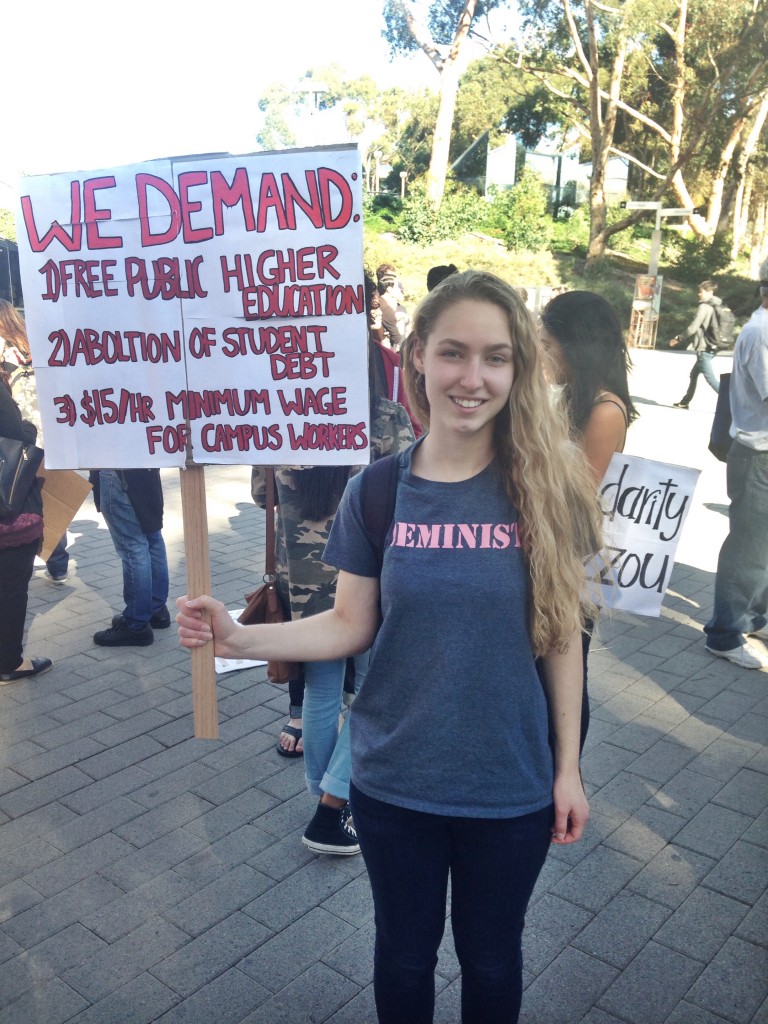 We joined our voices with activists across the country in the One Million Student March, a multi-faceted, direct action campaign. The final location of the UCSD protest was both strategic and symbolic. Students were blocked from entering a popular study space on campus and forced to engage with our calls for a more equitable campus and education system. At the same time, an ongoing 3 million dollar renovation on the entry level of Geisel library served as an illustrative backdrop to our picket signs. The construction is emblematic of the profit-driven priorities of the University of California system, which in the last fifteen years has tripled tuition and seen soaring student debt. Although a donation to renovate a fixture of student life seems reasonable and generous, it actually reveals the University of California’s increasing reliance on and preference for private funding like philanthropic giving and student tuition. This trend isn’t unique to California, either. Public universities across the country have made a concerted effort to remove public, democratic governance of their resources in favor of control by university administrators and wealthy benefactors.

It’s easy to see why the economic justice platform articulated by the One Million Student March resonates with students nationally. However, we were also calling for reproductive justice. Even though our chants never explicitly named it among our demands, reproductive justice was an undercurrent of our broader message. After all, envisioning an egalitarian future requires that people have the ability to meaningfully determine their own future for themselves. Student debt cancellation would free us from having to make the choice between paying back our loans and starting a family, a fifteen dollar hourly wage would allow students and campus workers to take time to care for our bodies, and an end to racism would ensure that all of lives are valued. Today, I and thousands of other students joined together to proclaim that taking back control of our education is reproductive justice.