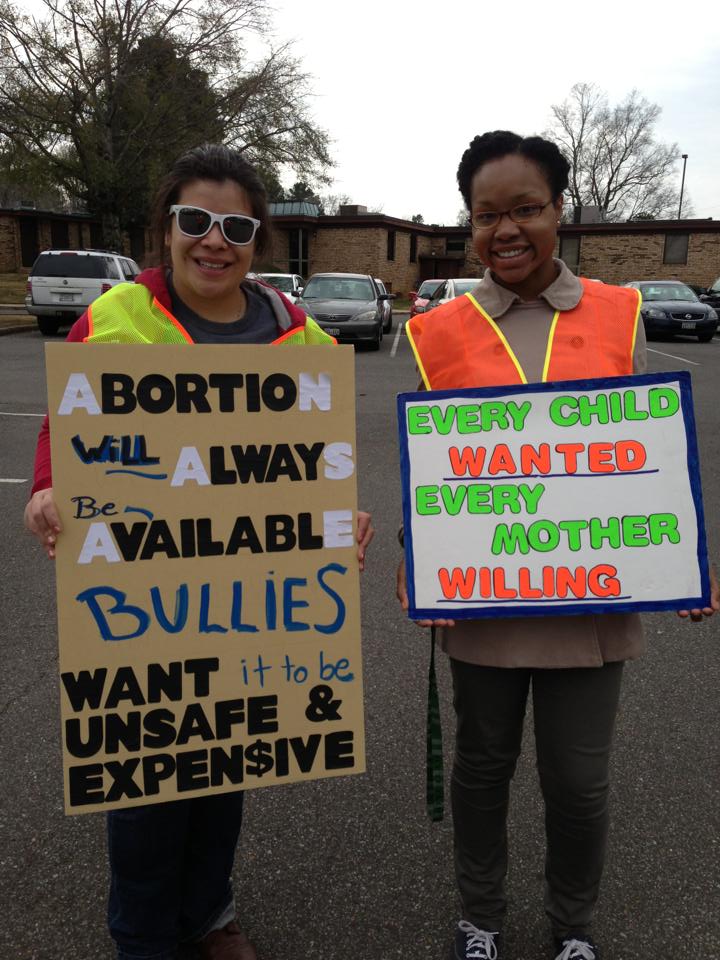 URGE students from Alabama escorting in 2013

When a friend of mine told me she went “escorting” on weekends I wrongly assumed she meant either she was joking or working nights to pay for college. What she actually meant, I learned, was that she helps escort people into an abortion clinic in town.

On Saturday mornings, she will stand in front of a local abortion clinic with a bright orange vest and an umbrella, offering to walk into the clinic with patients. Her job involved calmly talking to the patients, offering to help them into the clinic, asking them about their day, and other things of that nature. This may not seem necessary to some readers, except these patients have to, on a weekly basis, deal with overt and cruel harassment from a crowd of people standing only a shouting distance away.

I knew people when I lived in Huntsville who could, legally, block the entrance to a clinic, or so they claimed. But in Tuscaloosa, she explained, there was a technicality in the law that prevented them from getting closer. In many states, buffer zone laws have been collapsing since last year’s Supreme Court Case ruled buffer zones a violation of free speech.

Intrigued, I asked if I could come escort to see what it was like. It has been a while since then, but the lessons of that day stayed with me.

The crowd of protesters were not what I thought they would be. They were surprisingly multiracial, and when I thought they were going to call someone a “whore,” they instead used the term “murderer.” They refused to talk to any of the female escorts. One man, whose name I think was Lyle, brought a camera to take photographs of people to intimidate them. They pleaded to end the “Black Holocaust” of abortion, and offered to “help” the people coming to the clinic for a procedure. When one of the escorts asked what help they offered, they did not have specific references. They just insisted “they would find a way.” When they saw me out there, they assumed I was simply out of work and in need of a job, screaming that they would “find me a new one.” They asked what my mother would think of me if she knew I were out here.

Having not received training, I attempted to escort one couple from their car, but they spent nearly an hour in there trying to decide whether or not to get out (though I cannot say whether or not it was the fault of the protesters). My friend called me back.

“You’re supposed to let them come to you,” she said. “This is their decision and they need to feel comfortable making it.”

A number of the clinic’s patients managed to ignore the protesters, striding confidently to the door. Others tried to hide their face from the screaming and the lens of Lyle’s camera. The anti-choice protesters loved telling women, at the top of their lungs, that they were going to hell. Their offers of help, though in their minds compassionate, did not sway anyone to their side of the street that day.

They do this every Saturday, sometimes other days of the week. Sometimes, according to my friend, they call the police, only to be told to stop wasting taxpayer’s time. I haven’t been escorting but once since then, though I would probably do it again if I had time. My friend tells me the protesters have gone slack in recent months, showing up for a mere prayer session instead of committing to hours of jeering. And to a degree, they may be winning: Alabama abortion clinics have a tough time staying open, even the one here in Tuscaloosa.

Making the choice to have an abortion, for many, is hard enough. Being publicly harassed and shamed for it? It’s wrong. I wanted to ask those protesters why they felt that was a proper response to what they saw as a mortal sin. They don’t sit outside liquor stores or courthouses screaming at sinners. What do they contribute to the world by making other people’s lives harder? What good comes from persecution? I knew this kind of stuff happened in real life, but like anything, it was more potent seeing it in person. And though I felt ashamed of the thought, I did leave that clinic glad I didn’t have a uterus, especially with how hard it can be to get birth control.

I wonder if Lyle would support birth control access. It would mean less abortions, wouldn’t it? Not that there is anything wrong with getting an abortion. It just seems to me that the hypocrisy can be infuriating. Seeing those protesters was infuriating, too. We shouldn’t have to have patients volunteering at clinic to make people feel safe — we should support a person’s right to choose what to do with their own body. That’s what I learned volunteering at an abortion clinic. And in light of recent proposed changes to Alabama law preventing clinics from operating within 2,000 feet of a school, these clinics may not be open much longer.