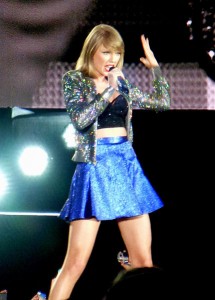 There are certain celebrities who I simply don’t like for one reason or another. Maybe they said something once that completely changed the way I look at them. Maybe they just rub me the wrong way. Maybe I don’t even know why I don’t like them. But I have to admit I get the tiniest sense of satisfaction or joy whenever one of them gets called out for saying or doing something problematic.

This works both ways though. There are celebrities who I love that are problematic. The most obvious is Taylor Swift. I’ve been a fan since her early days, since the first time I heard Tim McGraw. It’s been said time and time again in what ways she has been problematic, especially in recent years, so I won’t explain all of that to you.

As a social justice advocate, it can be difficult to balance who/what we like with what we know is right. This is something I have grappled with a lot recently. Should I quit listening to music that I love and that makes me happy—that has made me happy for years—because the singer has said and done some things that I disagree with or that are flat-out wrong?

The answer is no. We can like problematic people and things, but there is a certain way to go about it.

Before I begin, I want to direct you to the website I’ll be using for my examples. It’s updated kind of sporadically, but they keep a pretty thorough list of problematic things celebrities have done.

The first thing we have to do is acknowledge it. If we just ignore the problem, we become part of it. For instance, let’s say you’re a huge Amy Poehler fan. Amy Poehler is pretty great, despite being a slightly notorious white feminist. But if you fail to acknowledge that she has done some pretty shitty cultural appropriation in addition to the fatphobia and horrible portrayal of Native Americans in Parks and Rec, then you can’t move forward in the process of having a problematic fave.

So you’ve discovered and acknowledged that your fave is problematic. The next step is educating others. So you’re a huge fan of Lena Dunham and you’re feeling a little bit put-off by a lot of things she’s said/done and you want to do something about it. That doesn’t mean you have to stop watching Girls, but what you can do is let others in on your newfound knowledge. Maybe you’ve got a friend who idolizes Lena Dunham; you could teach them a few things. Or you can use one of the best tools we have as social justice advocates: social media. Spread the word!

On the topic of social media, you can also try to use that to contact your problematic fave. I know this one seems like a longshot, but you never know. If enough people rally together, something as simple as Tweets can call something to someone’s attention and bring about change. Maybe the singer or actor or director honestly didn’t realize that what they were saying or doing was problematic and you can open their eyes.

There is a bit of bad news. Sometimes, and this is perfectly alright if this happens, you just can’t take it anymore. Through high school, one of my absolute favorite bands was Lostprophets. If you know of the band, you know about what happened a couple years ago. If not and you’re curious, just look up Ian Watkins (warning for CSA and child pornography mentions). I tried to set aside my personal feelings about him and just listen to their music since his actions were not a reflection of the entire band, but I couldn’t do it. I had hit my breaking point on the problematic scale; just listening to him sing made me feel sick. So I just stopped, and that’s okay, just like accepting it and educating others is okay.

Whether you need to stop listening to/watching their work or need to try to gain the celebrity in question’s attention so you can educate them on social justice, you can still have a problematic fave, as long as you understand what makes them problematic.

One Response to “What to Do When Your Fave is Problematic”