White Feminism and the 2016 Election

These past few weeks have been riddled with many emotions: white supremacists are enthused that they get to reclaim a country that never belonged to them, marginalized communities fear for their safety in this new world order, where racism and bigotry are being normalized, and neutral white people are just now realizing that our country is fucked up. While most media sites are ignoring the people Donald Trump is appointing to his cabinet to focus their headlines and leads on celebrity relationships, I’m still unpacking the racist ideologies behind white women’s support for the future  president. 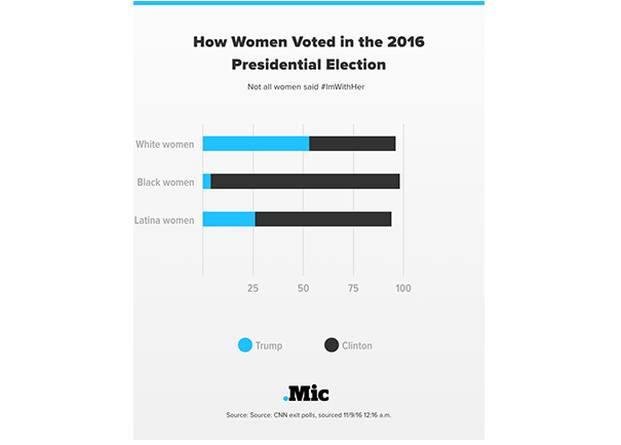 White feminism centers on gaining equal rights for white cisgender women (preferably middle class) that align with the same rights granted to white cisgender men. They are willing to shun their gender by neglecting the intersections of their identities in order to further the idea of white superiority. The prioritization of black women and other people of color, in addition to the array of sexual and gender identities, are hardly ever on the white feminist agenda. Many feminist groups usually claim that they are intersectional, but it usually ends up being a ploy to increase the quota in their organizations. This has made intersectionality, a term coined by Kimberlé Williams Crenshaw and not by a white feminist, as fashionable as a new black dress. White women seem to enjoy claiming their movement is intersectional, but when their whiteness is threatened, the privilege they receive from our broken and biased system overshadows any call for equality or change in the status quo.

So, apparently, it has become evident that Trump appealed more to white women because he was raw. They enjoy his perverse attraction (insert sexual assault) to white women since it furthers heteronormative ideals and white feminine beauty standards. As Lasha points out in an article for Salon, the fantasy of the colorblind sisterhood basically says we [the feminist movement] are down for you as long as you are white, straight and middle class. This election proved to white women that they may be oppressed and marginalized through their gender, but at least they are still white — an attitude that is rooted in the oppression of numerous marginalized groups over the course of human history. She also reminds us that white feminist groups have a history of neglecting black women and other minority experiences, even stealing their ideas without giving them due credit. This explains the uproar of white feminists when black men were granted the right to vote before them, which made them feel like they are one of the most oppressed groups. This type of rhetoric is portrayed in one of the early white feminists such as Frances Willard, who relied on racism and the preservation of white supremacy to earn equal rights for white women.

And this, people, is why I have come to the realization that the exclusion of intersectionality in some white feminist spaces isn’t by accident. White feminism relies on the oppression of black women and other women of color to ensure that their narrow agenda grants them all of the privileges and rights as white men. White women heard the sexist rhetoric employed during Trump’s campaign. They heard his usage of “the” when referencing groups or people of color. Rather than joining forces with black women who voiced their disdain for and fear of  a possible Trump presidency, many still chose to vote in such a way to uphold white supremacy and to restrict access to safe spaces for marginalized groups. As the #FeminismSoWhite movement takes form, it has become evident Gil Scott Heron is right: the revolution will be live.