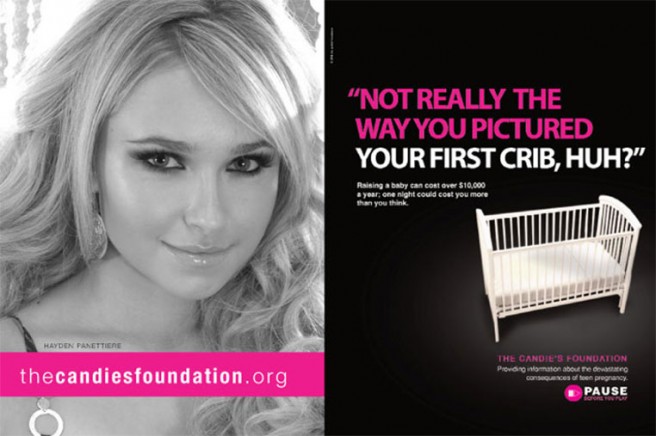 Photo by the Candie's Foundation

I celebrated my 20th birthday a few weeks ago, and, like many Millennials on a holiday, I struggled to find the perfect Facebook status to capture the moment.

I could have followed in the footsteps of my peers, who have overwhelmingly posted on their respective birthdays some variation of, “I beat teen pregnancy!”

The phrase is so common that a friend of mine actually yelled it to me when we crossed paths on my special day—“Happy Birthday, Robyn! And congrats, you beat teen pregnancy!”

But is teen pregnancy really something that needs to be “beat”?

This terminology implies that teen pregnancy is akin to diseases, like cancer or addiction.

Phrases like this add to a culture that shames people for getting pregnant, at any time outside of marriage but especially in the teenage years. However at the same time, we don’t provide adequate information or resources on pregnancy prevention or termination.

Instead of saying, “Hey, sex is natural and healthy and we know you might be engaging in it, so let’s go over what safer sex means,” we have this backwards way of thinking that if we don’t tell children about sex, they won’t have it.

I had a lot of privilege growing up—I had access to doctors (and Dr. Google) who I could direct any questions to.

But some people don’t have this privilege.  Some people aren’t able to teach themselves about sex or even, if they know about sex, they don’t have access to things like healthcare or contraceptives.

Don’t they deserve to have adequate knowledge about their reproductive rights?

Yes, which is why we need to make a shift in how we think about sex education. Instead of avoiding a conversation about it, or instead of promoting abstinence by making teen pregnancy shameful or scary, let’s talk about what it means to have healthy and safer sex.

When we do talk to teens about pregnancy, it’s often through using scare tactics—think Mean Girls “Don’t have sex, because you will get pregnant and die,” Candie’s Foundation’s teen-mom-shaming ads, and, yep, even just a popular phrase that people use on social media when they cross the threshold into their twenties.

We see issues with the stigma around teen motherhood relate to abortion access as well.

Just as we tell teenagers that it’s shameful and embarrassing for them to get pregnant, we turn right around and limit their access to abortions or reproductive healthcare.

Thirty-eight states require some form of parental involvement, whether it be consent, notification, or both, in a minor’s decision to have an abortion.

This effectively makes it impossible for some minors—maybe they don’t have a good relationship with their parents—to access these healthcare options.

Wake up, America. We can’t continue to tell people how awful teen pregnancy is if we don’t also provide them the proper resources they need to make their own reproductive health decisions and, if they so choose, easily and affordably avoid or end a pregnancy through contraception or abortion.

At the end of the day, teen pregnancy isn’t shameful.

It isn’t something to “beat,” and we need to stop spreading the idea that it is.

Instead, we need to make sure our teenagers receive an education and live in a culture where reproductive healthcare decisions are their own, and not society’s.

2 Responses to “Why “I beat teen pregnancy” is flawed”