Why the Fight for Abortion Rights Still Matters in California

The day Roe v. Wade was overturned on June 24th, I felt what many people felt: angry, sad, lost, disillusioned. And I did what many people did: checked in on friends, donated to abortion funds, reposted articles I didn’t fully read, and looked to politicians and activists for guidance on how we go from here. One that particularly stuck with me was Representative Alexandria Ocasio-Cortez’s remark that everyone needs to be completely “strapped in” to this fight, advocating that we shouldn’t take big historical moments like these for granted – we need collective power for the long haul now more than ever. When I heard this, I was nodding alongside the clapping emojis on her IG live, feeling invigorated to put myself into action and show up differently. After hearing how abortion activists and organizations have been prepping for this ruling long before June 24th, I realized just how little I knew about reproductive justice in this country. It pushed me to unpack why that was.

Living in California, a blue state with a reputation of being a “sanctuary” for abortion rights, made me feel a sense of relief the day Roe was overturned, a “Thank God, I’m not there,” when it came to seeing all the red states with trigger laws. This type of thinking, I find, can be quite dangerous because it can easily perpetuate a survival of the fittest mentality that contrasts the reality that all of us are connected and affected by this ruling, no matter where we live. Folks in red states, of course, feel and experience the repercussions differently. I echo Onyemma Obiekea, a Policy Analyst for the Black Women for Wellness Action Project, when she stated in the LA Times, “We [in California] don’t have as many restrictive laws, but we need to recognize all of the hurdles that folks still have to navigate.” 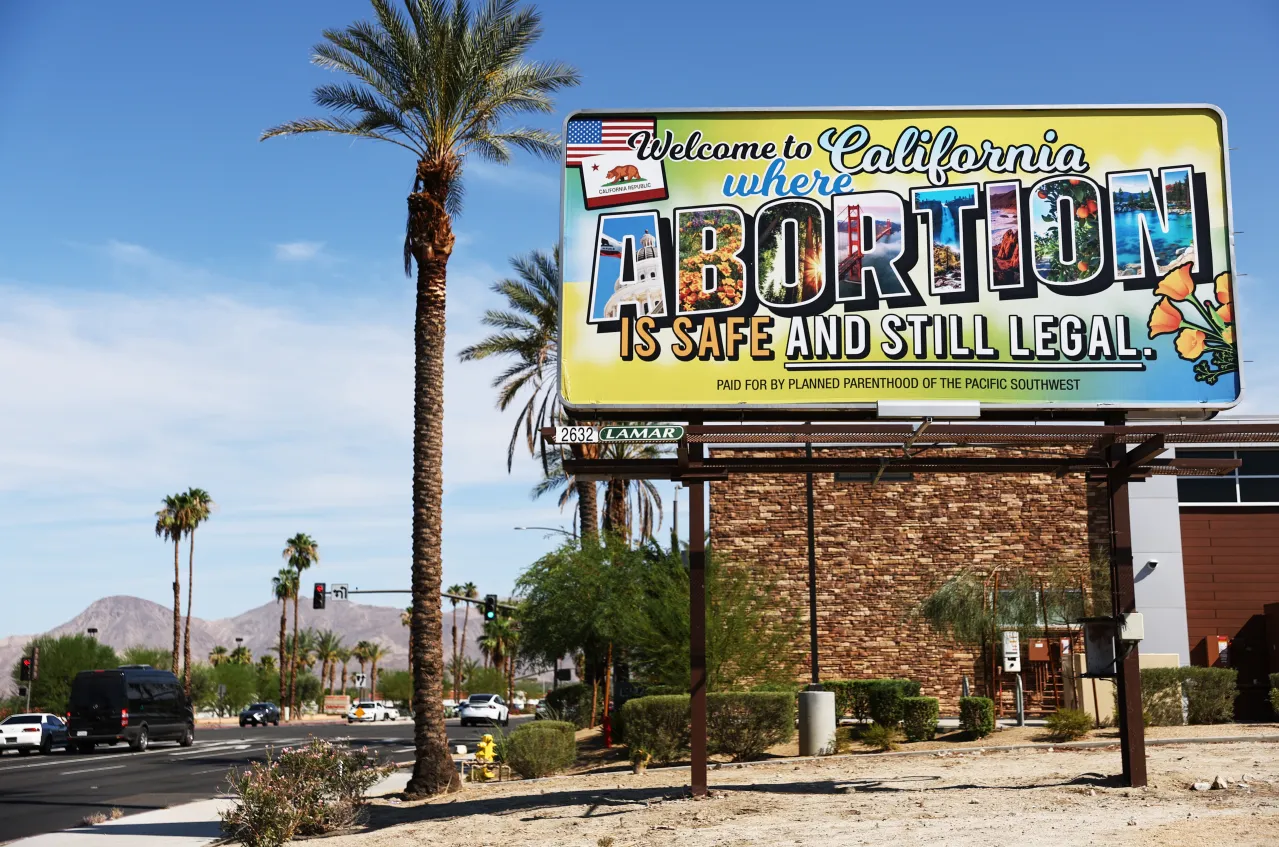 A billboard reads, ‘Welcome to California where abortion is safe and still legal’ on July 12, 2022, in Rancho Mirage, California. (Source: The Orange County Register; Photo by Mario Tama/Getty Images)

Despite being a blue state that has the strongest abortion laws in the United States, California still has several barriers to abortion access of its own, which is often overlooked due to its progressive policies and reputation. Barriers such as: 40% of California counties not having a clinic, prohibitive costs for getting an abortion, like childcare and lodging, and anti-abortion sentiment in rural and conservative-leaning areas.

A closer look into these problems was done in a 2019 case study by KFF and Health Management Associates detailing the lives of low-income women in Tulare County, an agricultural region in the Central Valley of California. The researchers’ key findings were characterized under seven major barriers that folks who can get pregnant face in the area: Medicaid coverage (though starting 2023, abortion services will be free in California), shortage of health professionals, lack of comprehensive sexual education, poverty and immigration status, domestic violence/ fear of authority, identifying as LGBTQ, and lack of access to abortion clinics. Along with being one of the poorest counties in California, Tulare County also has a large Latinx immigrant population, most of whom are undocumented. And undocumented Californians, as of a 2022 study by the UC Berkeley Labor Center and the UCLA Center for Health and Policy Research, are the largest group of uninsured individuals in the state. Rural areas tend to trend more politically and socially conservative, leading to the already few abortion clinics there to face constant threats of violence. Executive Director Katrina Cantrell of Women’s Health Specialists stated that their clinics in Redding, Chico, and Grass Valley have had to cover extreme costs for security due to being targeted by firebombs and acid in the past. The ever-present barrier for Californians, however, seems to be geography. Despite a population of 39 million people dispersed over 58 counties, the state only had 165 abortion facilities in 2021, as of a report from UC San Francisco’s Advancing New Standards of Reproductive Health Database. Communities not living in larger and densely populated cities, like San Francisco and Los Angeles, have much greater difficulty finding a nearby clinic, as well as, a means of transportation. For these reasons alone, folks in the Central Valley and other rural areas have not come to experience the progressiveness California is known for.

A 2021 graphic shows that most parts of California do not have abortion clinics, especially in the Central Valley. According to UC San Francisco’s database, California contained 165 abortion facilities in 2021. (Source: Calmatters.org)

Blue states also cannot fully fix the problems that occur on a national level. Despite Governor Gavin Newsom’s preparation for the impact of the June 24th ruling, such as creating a Future of Abortion Council in 2021 and passing bills that secure wide-ranging protections for reproductive rights, the state itself has limitations (which are difficult to accurately gauge and solve since California is one of three states that does not collect abortion information). Adequate and accessible medical attention and care is where blue states, like California, find increasing challenges since many out-of-state patients, mostly from red states, have flocked to their borders for an abortion. Being able to meet this demand with sufficiently operated clinics and providers can be difficult and costly. Newsom himself was caught at a crossroads when he vetoed a bill to train staff at abortion clinics to improve care for marginalized patients. The Governor stated that his decision was the result of “cost pressures not accounted for in the budget”.

It can be easy to forget, or not even know, that this is happening in California. I for one, would not have been aware of this information if I didn’t go looking for it. In the age of social media, where news is best consumed quickly and in bite-sized form, it’s easy to like, repost, and share without digging deeper. It’s convenient and just enough to signal to others and one’s self that you’re part of a movement. And I don’t think these actions are necessarily “bad,” but rather easy habits to fall into, especially when there’s so much news, ads, and content thrown at you all at once. I’ve caught myself complicit in this action many times because like the news cycle, I care deeply about breaking news then after 48 hours, the energy slowly dissipates and falters. While it’s true that societal problems in the U.S. can be incredibly exhausting and overwhelming to a point of hopelessness that self-care has become essential (and commodified into a million-dollar industry), what I’m intrigued by is how this despair can instead be a conduit for sustainable action, rather than something we grow used to. Like Ocasio-Cortez said, we need to be strapped into this fight and do whatever we can to push for a liberated world – a donation to abortion funds, a repost on social media, or a conversation with a friend may move the needle further. Building upon this momentum and consistently showing up is the key. And to do that requires constant evaluation and integration of this movement into our everyday lives. This is how we prevent the energy from burning out just as quickly as it lit up.