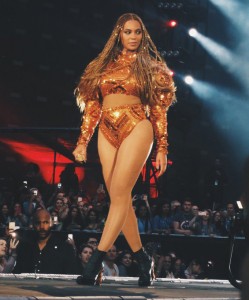 I update my music playlists every three months. If people want the latest reviews on music, I am not the femme they should be speaking to. For some reason, listening to new music stresses me out. For one, it’s extra work. It’s often hard for me to find music, and I don’t download it illegally. Also, there’s the whole sitting there and listening to the music thing. You have to form an opinion on it. All of this is just way too much effort for me. I’d rather just listen to my Kanye West and Florence + The Machine playlist I’ve had since high school, and go on my merry way.

Because of my lack of interest in new music, I guess I missed getting stung by the Beyoncé bug. I’ve never had a negative opinion on Beyoncé. I’ve thought she was talented, an amazing entertainer, and creative. However, her version of femme looks noticeably different than mine. I couldn’t see myself sitting down to eat macaroni with Beyoncé, and I couldn’t see myself talking with her about grassroots organizing tactics. I don’t think we would have the same sense of humor, and even though we both watch Real Housewives of Atlanta, I feel like we would have different favorite characters. Basically, besides our blackness and our femininity, I felt as though I could not relate to Beyoncé. That’s not her fault, nor does she strive to be relatable to me, but for that reason, I could not form an emotional attachment to her. I don’t feel moved to tears when she speaks, and I also took FOREVER and a DAY to listen to Lemonade. If a White feminist decides to use Beyoncé as their scapegoat for being anti-black then yes, I will drag her, but other than that I don’t really talk about her.

Regardless of how I feel about Beyoncé’s relatability, there remains one undeniable fact. She is the greatest entertainer of our time. There is no one better. This isn’t up for debate. This is something I have accepted as true, even as I rolled my eyes at the Beyhive leaving thousands of bee emojis underneath someone’s pictures. There is no one who can compete with Beyoncé in terms of entertainment, presence, and overall talent. Lemonade was a cultural phenomenon that changed the course of music, and Black womanhood forever, and these are just facts that we all have come to accept.

So why, on February 12th, 2017, in the Year of Our Lord, did I turn on the Grammys (taking a break from my Degrassi binge) only to watch a White woman who has made a career off of singing Black music, who is no more talented than the Black girl in our local church gospel choir who won’t ever make it big, win an award for Album of the Year over Beyoncé? Why? I just need answers. Why is it days later, and I am still upset? Why did I find myself tearing up when Adele told Beyoncé that she deserved to win? Why did I feel myself angry as I watched Beyoncé cry? Why did I feel personally victimized as I watched Adele accept the award she just admitted she didn’t deserve?

Growing up, most Black people will tell you that their parents had “the talk” with them. More important than “the Birds and the Bees,” this talk involves your Black parents going through the emotionally draining process of explaining to you that the world we live in does not want Black people to succeed. Breaking down the system of racism into a concept that a 7-year-old can understand, your parents will tell you that there are people out there that hate you for no particular reason other than the fact that you are Black. At this age, you may not even be aware that you are Black, or what race is, but you are always left with this sage piece of advice: You will have to work twice as hard to have what they have. You will have to be beyond the best in order to succeed in an anti-Black world. But if you believe in yourself and you work hard, you will survive.

I’m now 22. I know that this isn’t the case. You can work hard, you can be the best, and you can still lose, simply because you are Black. I know that fairy tales don’t come true, and a White Supremacist can become president. I know that the Falcons can lose after having such a gigantic lead (!!!), and Black people get killed daily for no apparent reason. But for some reason, Beyoncé was my last hope. She was my last guarantee of some kind of justice in the world. She was one Black woman who was going to get all of what she deserved. All odds pointed in her favor, and then she lost.

I don’t know what this means to me. I just know that Adele said it best. “What the f*** does Beyoncé have to do to win album of the year?”

In my opinion, she has to be White.