YOUTH AT THE FRONTLINES: JUSTICE FOR JANE AND #NEVERAGAIN 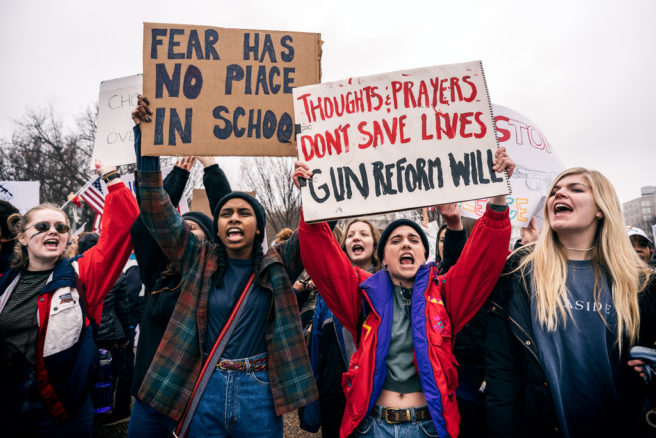 As a society, we have always underestimated young people. Young people are not seen as capable, credible, or serious enough to be leaders on the issues that affect them. We have seen politicians respond to youth activism by casting it aside as frivolous, but we know that our voices are powerful enough to scare them.

This week, we saw how the young activists at the front of #NeverAgain took over the country by organizing school walkouts, getting companies to stop giving NRA members benefits, and demanding politicians finally enact change through gun control. Emma Gonzalez, one of the teenagers leading the movement after the Parkland shooting in South Florida, said “We are children who are being expected to act like adults while the adults are proving themselves to behave like children.” Here, we see the hypocrisy in the way our country treats young people: we do not allow them to make decisions for themselves, but we expect them to prepare themselves for mass shootings as if they are a norm.

The same can be said for Jane Doe, the young refugee that was held hostage by the Office of Refugee Resettlement for seeking an abortion. The federal government banned Jane Doe from getting the abortion she needed because of their anti-abortion agenda. On top of the obstacles set in place by the federal government, Jane Doe struggled to access her abortion because of Texas’ judicial bypass law. Because Jane Doe was a minor, she was expected to appear in front of a judge in order for her to get permission to get an abortion without her parents’ involvement. Jane Doe was treated like a child incapable of making decisions over her body but was expected to navigate a judicial bypass as a minor without any help.

Jane Doe showed strength and resilience when she had to go through the obstacles that both the state of Texas and the federal government placed on her. Moreover, she showed strength and resilience in sharing her story and demanding justice. This week, the 1 in 3 Campaign hosted their fourth annual Abortion Speakout in dedication to Jane Doe. The speakout showed us how youth activists and storytellers are fighting back against stigma and anti-abortion legislation. Further, young activists with the 1 in 3 campaign demanded Scott Lloyd’s resignation for his abuse of power as the head of the Office of Refugee Resettlement. These actions should serve as a reminder that 1) Young people have a tremendous amount of power, and 2) Everyone has the right to make decisions over their own body, no matter the age.

“When did children become such a dirty word? Adults are saying children are lazy, meanwhile Jaclyn Corin organized an entire trip to Tallahassee, three buses stuffed with 100 kids and reporters who went to discuss our pitiful firearm legislation with the people who can-but won’t-do something about it.” Emma Gonzalez and her peers are demonstrating the tremendous power there is in youth voices. We need to make more space that invite young people to make themselves heard. While there are many dismissing the #NeverAgain movement, we are also seeing a shift towards giving these young activists a platform to call for change. That’s the future we should be striving for.