When they’re on your team, they make it hard to work or play with others.

When they’re in your family, they make it difficult to go home for the holidays. They fracture family structures.

If they’re a workplace sexual harasser, they make it hard to go back to work.

If they’re friends with your roommates, they make your living situation feel unsafe.

When they’re an artist, they ruin their own art by making it hard to enjoy. After an artist commits harm, their fans have to reckon with whether it’s ok to enjoy their work anymore. Fans must figure out if and how they can separate the art from the artist. 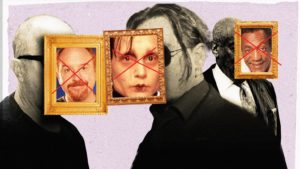 Abusers ruin everything. I feel it’s important to phrase it this way because at least in my experience, it feels that those who come out and speak about the abuse are often blamed for destroying things.

A couple months ago, one of my colleagues wrote a piece about cancel culture and how it’s toxic.

I was recently canceled by someone who told me about the abuse they experienced in our community.

And by canceled, I mean they blocked me. While it didn’t feel great and I feel in the dark, I’m not sure if I can even blame them for canceling me.

I cannot be 100% certain, but if I had to guess I would say they probably blocked me because I remain connected to those who abused them, at least on social media, including those who I have felt harmed by in the past.

I’ve been in situations where after experiencing abuse, my abusers remained popular and their social capital remained intact. I reacted either by a) continuing to endure the abuse while assuming that I was being too sensitive because everyone else still liked the abuser OR b) cutting off everyone who still liked or even associated with the abusers.

However, I feel it’s unfair to victims if our transformative justice only focuses on holding abusers accountable and helping them to change but neglects the part that involves helping victims and survivors to heal.

At the moment, I honestly can’t heal the person who told me about their abuse nor do I have the capacity to hold their abusers accountable.

But if that person needs to block me or anyone to feel safe, I think that should be viewed as part of the transformative justice as much as holding their abusers accountable. If people need to cancel abusers and those associated with the abuse to heal, that’s equally important.

The Revolution Starts at Home explores examples of transformative justice through essays. One essay is about a situation where a community organizer abused another. During the transformative justice process, there were two teams–a healing team and an accountability team–and at no point was the victim required to have any contact with their abuser.

I think that abusers can use both cancel culture and transformative justice in toxic ways. But anyone who desires to do harm can use anything as a weapon. I love the pillow metaphor. Pillows are not designed to hurt people. In fact, they’re designed to make people feel comfortable so they can rest. However, pillows can also be used aggressively in a pillow fight or to kill someone by suffocating them. If a pillow fight survivor doesn’t want to be around pillows, they can’t be blamed, but the person who harmed them can. It’s ok to blame them. That doesn’t make you less of a prison abolitionist. It’s not, however, ok to blame the survivor for not wanting to be around pillows anymore. They didn’t ruin pillows. The person who decided to abuse pillows did. People should be able to cancel their abusers and even people and things associated with them.

Everyone is an expert in their own lives. They know what they need to do to heal. Cancel culture shouldn’t automatically be looked at as a form of punishment…which I think is the issue some transformative justice advocates take with cancel culture. That it mirrors the prison system or even solitary confinement. It can be viewed as a way of keeping survivors safe, emotionally or physically.

Because honestly, when abuse occurs someone will feel isolation, whether it’s the survivors of abuse or the abusers. In my experience, when abusers are allowed to maintain their social capital after abuse, it’s the victim who feels social isolation. Because they no longer feel safe at community events where their abuser is still welcome. They may also feel emotional isolation even if they physically attend community events because they can feel alone in their view of their abuser.

But victims should not be made to feel like they’ve broken community connections. It was their abuser who broke these connections because…well—abusers ruin everything.