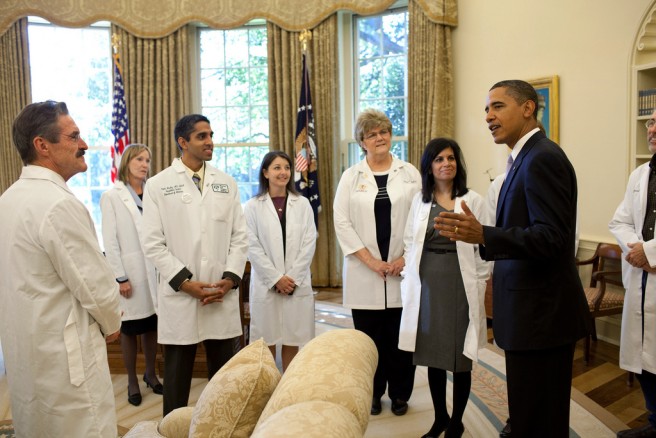 Though many religious leaders say it is not required given the circumstances, diabetic and pregnant Muslims often try to celebrate Ramadan with both fasting and prayer. This practice requires the supervision and care of a culturally-competent doctor who understands both the medical issues that could spring up from fasting as a diabetic or mother-to-be, but also one who understands the cultural significance of the holiday. Culturally-competent doctors can be hard to come by in the United States; many medical students have only just begun to be assigned textbooks on the subject of treating those from foreign cultures.

So why, then, is it so difficult for doctors from foreign countries to get certified in the United States?

According to the Migration Policy Institute, there are now nearly 42 million immigrants living the United States, and another 40 million children born to these immigrants. These immigrants will likely be using the American healthcare system when they require it. That includes reproductive healthcare, despite the current limitations for immigrants of all legal statuses. Doctors dealing with immigrant care, or the care of any patient that does not have the same ideals regarding medicine the way American doctors do, might face many challenges to providing satisfactory healthcare.

Such challenges include language barriers, socioeconomic factors, different attitudes towards sickness and even the type of healthcare system available. The National Institute of Health, among other organizations, is trying to lessen the disparity between doctors and patients of different cultures.

Yet one of the most obvious fixes- allowing foreign doctors to practice in the USA- is not a route anyone is pursuing, despite a predicted shortage of physicians in the near future.

For a foreign doctor in the United States, the process of becoming certified is difficult. According to this article in the Atlantic, a foreign doctor trying to work in this country is only allowed to practice in the U.S. once he has obtained a license in the state in which he intends to work. The person must pass the first two steps of the United States Medical-Licensing Exam (USMLE), then become certified by the Education Commission for Foreign Medical Graduates (ECFMG), get into an accredited U.S. or Canadian residency program, and finally, go back and pass step three of the USMLE. Each of these steps could take multiple years, repelling doctors who are already able to practice in the country in which they were trained.

An American doctor practicing in Europe need only repeat residency requirements in their new country, not renew their license entirely. In the USA, they need to pass all these exams, which requires American recommendation letters and a work visa (that usually requires them to return home after their training and forces them to reapply). These doctors are usually just as well-trained as their American counterparts, many with years of experience under their belts.

Another barrier facing these doctors is the fact that medical schools only allow a small number of students in each semester. In fact, the majority of American doctors trained abroad are not immigrants, but American citizens who could not get into medical school in their home country. Getting to be a doctor in the USA is so difficult, even for Americans, that many immigrants with medical training are settling for lower-level jobs.

This is all despite the fact that doctors are clamoring for residency here from all over the world. So much so that it has become a major obstacle in the thawing of US-Cuba relations. Doctors in America, after all, make boatloads of money (even when offset by the cost of medical school).

How does this relate to reproductive health care? In terms of the lack of doctors in general, there is an obvious need for more people in the field. In terms of cultural competency, reproductive health is perhaps one of the most underrepresented by culturally-sensitive doctors. This is an even larger issue than it might seem, too, as cultural views on child-rearing, birth control and abortion differs far more widely than commonly held views on how to treat things like heart disease or the flu.

Bringing in more foreign doctors might contribute to alleviating both of these problems.