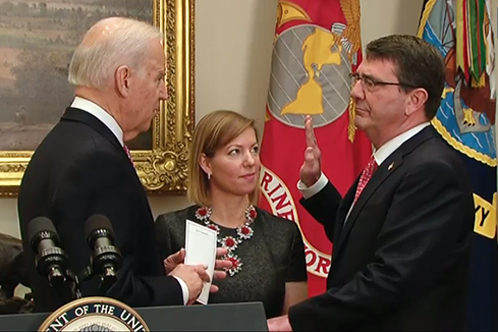 For whatever reason, some people feel the need to touch other people without their permission. We see this all over in society, but it seems to be common among men. More specifically, men touching women without permission. This may seem harmless to most people, but there is a very troubling nature to this kind of touching.

On February 17th, our Vice President Joe Biden was doing a swearing in ceremony for the new Secretary of Defense, Ashton Carter. After administering the oath of office, he stepped to the side to allow Sec. Carter to speak, and placed his hands on the shoulders of his wife, Stephanie. He left his hands there for over 20 seconds before whispering in her ear and stepping back.

Of course, this is nothing new for Biden, as it seems he has always been described as “handsy.” But the most troubling part of this is that the media and most people seem to treat this as a joke, or a gaffe. Really we should be looking at this as a form of assault, even if it may seem harmless. This type of behavior is most certainly not a joke, and it was not unintentional.

A few sources picked up on how problematic this really was. The Daily Dot posted an article about it, and so did The Guardian. Even The Daily Show ran a segment on it, called “The Audacity of Grope.” But the traditional media simply thought of it as “Biden being Biden.” And that line of thinking can cause huge problems for accountability. If we can say that, why not say that it’s just “boys being boys?”

Another example of this troubling behavior is at this year’s Oscars ceremony. John Travolta awkwardly touched the face of Idina Menzel during a presentation, and it seemed that both the audience and writers on the internet were uncomfortable. Earlier that day, he also seemed to infringe on the personal space of Scarlett Johansson, leaning in for a kiss on the red carpet. Since then, both incidents have reportedly been “debunked” as having been rehearsed and welcome.

But it really doesn’t matter why either of these men did what they did. After all, these are just a couple of examples of a much larger problem: Entitlement. Our problem here, and everywhere else in our society, is that men feel entitled to the space around them and whoever may be in it. This leads to an inevitable violation of another’s personal space. It also shows a fundamental misunderstanding of autonomy and a person’s right to be free from harassment.

There is also a power dynamic at work here. Obviously it would be difficult to turn away and shame a sitting vice president. It would be difficult to show obvious disapproval on stage at an awards show. The people that act in this manner usually do it because they know they can get away with it. It is a type of power play- showing through body language that they are more powerful.

Certainly either of these incidents could have been more welcome than they appear on television, but that isn’t the point. Showing behavior like this and defending it to the public offers up a view of these actions as acceptable. A person watching this could look at it and say, “Hey, if they can do it, it must be fine!” This perpetuates the myth that this is harmless, and contributes to rape culture.