There is a huge culture of stigma and shame around pregnant and parenting teenagers. It comes from conservative talking heads and, sometimes, it comes from well meaning pro-choice activists who want to reduce unintended pregnancies. The big problem is that this stigma translates into real-life barriers to education, healthcare, jobs, and opportunities for young parents and their families.All young people need access to information, healthcare, and support – especially those who choose to parent. These young parents need affordable prenatal care, accessible child care, quality jobs and financial and moral support to continue their education.URGE supports access to comprehensive sex education and maternal healthcare. We advocate for young people’s access to contraception and support for young parents who want to attend college. Happy and productive communities ensure their citizens have access… Read more »

Texas Leader Writes About Her Experience as a Young Parent

Kathleen, one of our student leaders at UTEP, wrote this moving piece about becoming a young parent as a part of the Strong Families Mama’s Day celebration. Read the whole piece here.

The Pregnancy Workers Fairness Act (or PWFA) ensures that workers can’t be forced out of their jobs just because they are pregnant, and that these workers receive the accommodations needed to do continue working in a safe environment.

Young vs. UPS was a Supreme Court case about pregnancy discrimination at work. We need new legislation to make things better for pregnant workers. 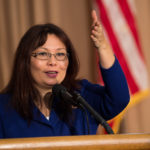 On Monday, Senator Tammy Duckworth became the first senator to give birth while in office. She will be taking parental leave, but Senate protocol could keep her from being able to vote on legislation during that time. And she faces another problem upon returning to the Senate—no children are allowed on the Senate floor. “You’re not allowed to bring children onto the floor of the Senate at all, so if I have to vote and I’m breastfeeding my child, what do I do, leave her sitting outside?” said Duckworth in Politico’s Women Rule podcast back in February. On Feb. 5, she also penned an op-ed for CNN calling attention to the need for not only parental leave, but more accessible childcare options and paid sick leave for working Americans. “When people… Read more »

A few weeks ago on a sweltering, Kansas afternoon, a friend and I stopped by a sub shop near my house for lunch. The store was empty because the lunch crowd hadn’t made their way in yet. I had been to this establishment several times before because my partner loved their subs and needed no excuse to go there. We ordered, sat and I nursed my just woken up daughter who was a bit cranky. Our little nursing session ended a few minutes later, just as the manager brought us our food. As he put the food on the table he looked at me and said “would you like a towel? This is a family restaurant, You can’t just be out here like that. Either I can bring you a… Read more »

We know far too well that discrimination comes in many shapes and forms, and too often it happens to pregnant people in the workforce. All over the country, people are being denied jobs because they are expecting or losing their jobs while pregnant because of a lack of accommodations. Earlier this week the Pregnant Workers Fairness Act got its first briefing on the Hill; this is huge. The legislation would help curb the discrimination against pregnant employees in the workforce. People who are pregnant sometimes lose their jobs because their employers are not willing to make the necessary accommodations for them. Companies are treating pregnant people as disposable,  and this bill is a much needed step to ending this common and unfair practice. There are several parts of the bill that… Read more »

I Didn’t Love My Newborn

I didn’t love my newborn. I had loved him before he was born. Through the pregnancy complications, the month of bed rest, I had loved him. Feeling him kick, seeing my huge stomach sway with his movements whenever my husband spoke. Knowing he was there brought me comfort when I was afraid. I even loved him when he had a foot wedged in my rib, as he often did. But here he was, my baby, finally in my arms, and I didn’t love him. “This is not how I’m supposed to feel.” Nothing about my son’s entrance to the world happened the way I’d hoped. I’d planned for an unmedicated labor, complete with yoga balls and a jacuzzi tub. What I got, thanks to a terrible case of pre-eclampsia, was… Read more »