University of Alabama Advocates for a True LGBTQ-Inclusive Campus

Our chapter at the University of Alabama has worked this semester to make their community a more inclusive place for LGBTQ students. The chapter has sponsored a piece of proposed campus legislation to increase the number of OB/GYNs at the student health center to alleviate long waits for annual check-ups. Before agreeing to sponsor the bill, the URGE chapter insisted on changing the language of the bill to be inclusive of trans and gender non-conforming students who need OB/GYN services. With that change made, they will work with the Student Government to pass this legislation and increase services on campus. University of Alabama has also been busy participating in a local pride event and commenting on the ongoing battle to hold anti-LGBTQ judges accountable.

A Great Get-On-Board-Day at the University of Alabama!

On August 27th, the Alabama Alliance for Reproductive Justice and University of Alabama Feminist Caucus talked to thousand of students and gave away hundreds of condoms at UA’s student involvement fair, Get On Board Day! Here are just a few pictures of these campus activists doing outreach and spreading the word that feminist and repro justice activists are present and proud on campus!

This summer Feminist Caucus (UAFC), a chapter at The University of Alabama, participated in legal observation, escorting, and clinic defense at Reproductive Health Services in Montgomery, Alabama during the Operation Save America (OSA) siege of the city. UAFC had nearly ten members attend a legal observation training in late June where they learned skills that were not only applicable to the OSA defense, but also for defending the clinic in Tuscaloosa near campus. Four UA Feminists turned out to work with the clinic during the week of the siege. Back in the spring, UAFC held several events, including Silhouette: From the Shadows to the Spotlight, an open mic and spoken-word event, and a town hall meeting about campus sexual assault, which about 40 students attended.

UA Feminist Caucus hosted an event in collaboration with the National Council of Negro Women called “Black Girls Rise.” This panel-based event engaged students, faculty, and community members to have a discussion about the experiences of Black women in predominantly white institutions. Discussion followed about beauty standards, colorism, natural hair, and how Black women are sexually perceived by the culture. Upon entering the event, students would fill out a paper that said “I Rise Because _______,” as a demonstration that they are more than stereotypes. 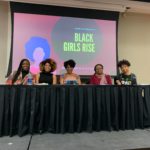 URGE UA is a small but mighty chapter, located on a campus just one mile from one of the state’s only three abortion clinics. On top of being a champion and advocate for our clinic, we are at the forefront of the fight for sex ed reform. Our biggest event each year is the Walk of Shame, a survivor-led protest against sexual assault and rape culture on our campus.

Samaria from the University of Alabama URGE chapter was interviewed on Huffington Post Life, talking about free speech zones on campus, as well as posters from the Genocide Awareness Project! Click here to see the full segment!

On April 2, students held an event to lobby their state legislators, asking them to oppose the new TRAP laws moving through the legislature. The chapter’s leader, Amanda, spoke specifically about the impact of these laws on young people.

Alabama Works to Get Voters to the Polls

They organized a trick-or-vote dorm storm, a political action fair, and a phone bank to remind students about voting.