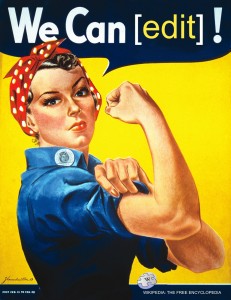 Last Saturday morning, many Oberlin students gathered at a local art venue with their laptops, chargers, and desires to tell the world about more women artists through Wikipedia. Students of all types of gender expression woke-up early on Saturday morning to drink coffee and eat breakfast together while communally editing Wikipedia’s art pages. Oberlin’s edit-a-thon was part of an international event hosted by Art + Feminism to revamp Wikipedia’s pages to close the huge gender gap that is visible in it’s content. This was the second annual Art+Feminism edit-a-thon.

The gender trouble with Wikipedia’s coverage has been well-documented. Wall Street Journal’s coverage of Saturday’s event noted that, “In a 2011 survey, the Wikimedia Foundation found that less than 10% of contributors on Wikipedia identified as female.” It is difficult to pin down specific reasons for this gender gap. Some potential identifiers may be in the inequalities in leisure time, how socialization shapes public behavior, and the frequently contentious nature of content that is posted on Wikipedia. Although it is difficult to determine why there is a gender gap, it exists and significantly skews the content. The extreme lack of female-oriented content and participation makes users significantly lack access to information that should be provided in an encyclopedia of shared information that is increasingly being taken more seriously.

Liz Pelly of Impose Magazine described in an article about the event: “There are worlds within Wikipedia, but in a larger sense, Wikipedia is also a reflection of the world. Power structures and inequalities included.”

Edit-a-thons can be done on practically anything, but the area of art and feminism was specifically chosen for this event because of the extreme disparities in information that exist on the overlap between the two. This type of edit-a-thon activism is also known as “information activism” and it is becoming increasingly important as the internet’s influence on knowledge grows.

Even if you missed this event, there are always other really helpful ways to contribute and help promote art by women. You can always go on Wikipedia and add entries in your free time or organize an edit-a-thon on your campus or with your friends. Spreading the word about all of the amazing art that is and has been produced by women, particularly by women of color, is so important because education may be the first step to closing the gap in the arts between white men and everyone else. This survey by the Committee on Women in the Arts of the College Art Association shows some really disheartening statistics about the student body population in the arts. While about 52.5% of women make up the total faculty at art schools, only 2% are women of color. Edit-a-thons can help educate people about the many women that are making art and may help inspire young women to pursue careers in the field.