As a black woman, I have a deep-seated anger for people who attempt to emphasize the qualities that all black women should have to be more desirable on social circles. Those who criticize their poise, their grace, their idea of elegance use blatant misogynoir to disprove the humanity of black women. This dissatisfaction of black women comes from many people, including black men and black women. One black woman who is gaining momentum for her views on black women, equality and sexual and reproductive freedom: Ro Elori Cutno. Ro Elori Cutno is the author of Man Leads, Woman Follows, Everyone Wins that claims to be a manifesto for black woman to keep a man. While Cutno claims to be an expert and professional consultant of culture and language, her rhetoric invokes the sense that she doesn’t know what she is talking about. She uses stereotypes to make women feel insecure about their own identities and berate black women who seek out opportunities outside of the home.

Across many posts on Cutno’s social media sites, she offers advice and wife school. Wife school is set up to prey on black women and critique their idea of femininity. This idea of femininity was created to alienate black women from white women during captivity. Cutno reinforces negative stereotypes to make black women, specifically, change their behavior to attract a suitor.

Her rhetoric blames black women for the failure of the black family and the faults of black men. On many of her posts, she quotes lines from her book that focuses on an appreciation of traditional marriage, which isn’t a bad thing. However, going so far as to say that women should mop the floor on their hands and knees is should be the standard of black femininity. She also critiques masculinity. As Cutno states on her website Roots of Royals, masculinity should be protected and that women shouldn’t bring men who have lost their masculinity, since the husband’s masculinity should be safeguarded. On the same note, she constantly calls black women manly and berates black feminists who believe that women shouldn’t be obligated to only household duties. Black feminists also criticize the idea where some people will post selfies and Cutno criticizes their image. This type of rhetoric damages the idea of black womanhood and preys on their insecurities and/or vulnerabilities.

In addition, Cutno has unbelievable, probably borderline dangerous, ideas on how a woman can avoid rape.

Basically, she is saying that in order to avoid rape, you should give the potential rapist respect. However, we have seen how this has happened in the past. Sometimes, when men see that a woman is being respectful and showing them attention, they make you feel a sense of obligation to them. However, turning down their advances can get you killed since this type of domestic violence is rooted in misogynoir and fragile masculinity. This horrible sexual violence prevention technique reinforces the idea of victim blaming and that the victim is responsible for the acts of the perpetrator. The rationality that femininity protects women from unhealthy men will never prevent rape or murder.

Another idea that Cutno advocates for is that a woman should always be in the company of a man because men lead and women follow. As stated earlier, the idea of traditional values aren’t necessarily wrong, but it is the way Cutno uses these conservative standards to contribute to the oppression of black women. One of the most awful things she has stated is her opinion on Sandra Bland’s murder. 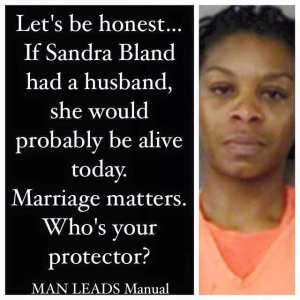 This dangerous and delusional idea that if Sandra Bland had a husband or boyfriend would lower her chances of death is rooted in misogynoir. Having a man in your life is not an automatic shield from the repercussions of sexual violence, police brutality and other types of violence committed against black women’s bodies. If this were true, black men wouldn’t be subject to this same violence. Trayvon Martin would still be alive. Mike Brown would still be alive. Philando Castile would still be alive. Assuming that cis-gendered men are born with the trait of being protectors places men and women in binary categories. All men don’t have the genetic code of being protectors. This makes Cutno’s logic bogus. Research shows that the presence of black men for white officers directly influences these types of violence and aggression.