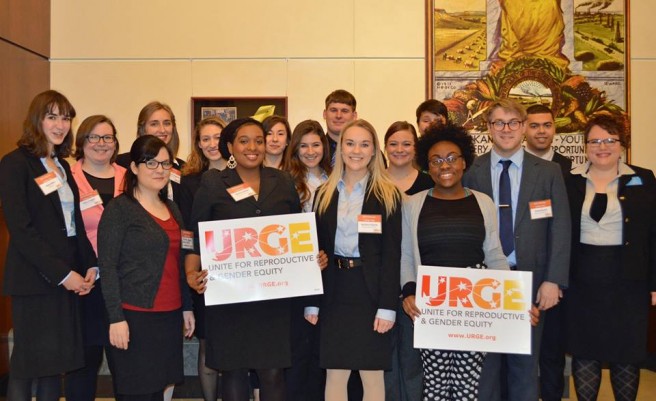 Recently introduced in the Kansas Legislature was a bill that could shape up to be the strictest abortion law in the country. The proposed bill is a ban on a specific type of procedure that is primarily used in the second trimester, Dilation and Evacuation. Anti-choice advocates have been pushing to define this method as “dismemberment abortion.” If this bill were to pass, it could effectively outlaw any access to safe abortion care beyond 14 weeks of pregnancy.

This past Monday, I attended an Advocacy Day at the Kansas Legislature that was hosted by URGE. Our focus for the day was a sex education bill that was recently introduced, outlined in my preview several weeks ago. However, in the days leading up to our trip, we were made aware of a new bill being introduced, the first of its kind in the country. Fortunately for us, the Senate Public Health and Welfare Committee set the hearing for this bill on the same day as our Advocacy Day. This allowed us the opportunity to attend the hearing, offering support for the testimony given by providers in Kansas, and observing the committee’s reaction to both pro-choice and anti-choice testimony.

Attending this hearing was both informative and appalling. There were a few things about how the hearing was scheduled that made the intentions of the committee clear. First, the hearing was set on a Thursday for the following Monday. This was done to make it more difficult for the opponents of the bill to be prepared and organize supporters. Second, the committee scheduled the meeting only one hour before the members had to be on the Senate floor. It was set this way so that there would not be any time for questions from those giving testimony. Third, the opponents of the bill were scheduled to offer testimony first, with proponents scheduled second. As a result, there was no opportunity to rebut the false claims offered by the bill’s advocates.

The testimony offered by representatives from Planned Parenthood and Trust Women, two organizations that provide abortion services in Kansas, was concise and to the point. Their main points included that not only is this bill harmful to the ability of women to access the services they need, but also that this bill is blatantly unconstitutional. Since Kansas has spent over 1 million dollars since 2011 defending unconstitutional abortion laws, and the State is also facing a looming budget crisis, it simply does not make sense to pass a law that won’t go into effect and will cost extra money to defend in court.

On the other side, the argument was interesting. In essence, the testimony provided relied on the idea that a D and E procedure causes some sort of pain to the fetus, which has no scientific backing. The other part of the testimony that I found the most appalling was the argument that a D and E procedure is too safe, too fast, and not as painful or intrusive than other methods of abortion. This was being presented as a problem, but I believe it clearly outlines the problem with the anti-choice movement. Bills like this are not promoted for the health and safety of women, like the advocates for TRAP laws would have us believe. They are instead about controlling reproduction, and punishing women for even considering an abortion. Why else would they push a bill because they think abortion should be more intrusive, risky, and painful?

As student activists, it is an important part of our work to keep up with this type of harmful legislation. Getting the opportunity to attend and observe the process by which these bill pass has been a positive experience, even if the results are negative. Also, building these relationships with our policymakers is an important step in building our power in our communities. These laws have consequences that affect us and others in our community, and as young people, making the effort to have our voices heard can only have positive results.