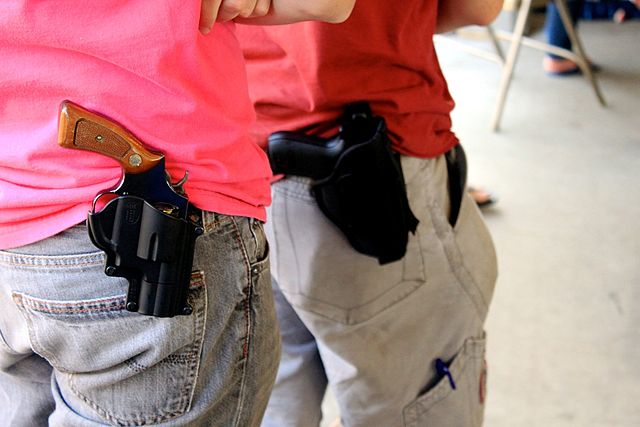 Come July 1st, 2017, Kansas will become the first state that allows students to bring guns on campus without a permit. As a community psychologist and a doctoral student at Wichita State University, I have always held a unique perspective on campus carry; not like the negative rhetoric that you read about from the “alt-right perspective,” where gun safety advocates are perceived as “snowflakes.” You can’t imagine the backlash I have received about my nagging for “extra rights”; they would make anyone want to roll their eyes for an infinite amount of time. But the concerns of hundreds of students on Kansas campuses should not be taken lightly. July 1st will be the start of a new college experience — one where some students will be forced to have a heightened awareness for our own safety, just because of who we are.
To me, the common concerns that people see with conceal carry on campus (i.e. increase risks of suicide, domestic and dating violence, and alcohol related deaths) are just the beginning compared to my own concerns as an outspoken queer woman of color. Wichita State University has a well-known problem with hate speech, which was demonstrated just a few weeks ago, when a black student was attacked on campus by a white student’s parents, with said student’s mother angrily using the n-word. A few days after this incident, Kansas State University officials found a noose hanging from a tree. The clearly toxic political climate has infiltrated social sphere’s here on Kansas’ campuses, and adding concealed carry will only embolden white supremacy.
These past few months, I have been afraid that racial tensions will be worse once guns, that you can just buy without any training, are on campus and being held by students who may criminalize students of color. That is why last Wednesday, a few students, activists and I went to the Kansas Board of Regents (KBOR), and implored them to stand with our students after a senator told me it was up to the chancellors of these universities and the members of KBOR to stop campus carry from happening in July.
As we entered the KBOR building, we were then escorted by the police to the other room because the room where the meeting was taken place was “overflowed.” They knew we were coming to express our fears about campus carry and although we are their biggest stakeholders as students, it was evident they did not care to listen to our voices. I went by the desk and asked if at least one member could come speak to us. During the break, a member from the budget committee came by. We explained why campus carry will be a bad idea and we expressed our fears for our lives. She listened with tears welling up, but ultimately said that KBOR’s job is to follow the law, not to get involved in politics. This is the same narrative that is being used by chancellors on our campuses. The KBOR member explained that we should speak to our legislators if we wanted something to change. However, the politicians who represent us are not listening either, and are instead more concerned about protecting with their back-door dealings with the National Rifle Association (NRA) lobbyists than they are with representing actual students who will experience the effects of this law first hand.
After the meeting was over, we all stood out in the hall with our mouths covered by cloths that spelled NRA. As we stood there, some said hello while others just laughed at us. I kept thinking, who really is our champion? Who will stand up for our rights? Because right now, with the failure of our legislators and our KBOR and the implementation of the new law a month away, it seems that nobody in a position of power wants to support us.

“Deborah Ojeda-Leitner is a third-year Community Psychology graduate student at Wichita State University. Before graduate school, however, she proudly served as an AmeriCorps member in New York City and was involved in community health. Her interests include health, social justice, equality, social change community-based interventions and advocacy. Recently, she finished a project on health-related stereotype threats among the LGBT community and hopes to expand on healthcare, social justice, and public policy.”