“But Hannah,” you say. “It’s harmless! I’m appreciating how pretty I think this looks!”

Let me make this clear: all culturally appropriative costumes are bad and have very real harms. This is not a post debating on whether they are or aren’t. There are a plethora of resources on the internet dedicated to educating others on this subject.

However, as this time of year rolls around, I find it even more tiring when non-Asian people wear hypersexualized traditional or cultural East Asian garments. Not only is it deeply offensive and problematic to wear parts of East Asian culture as a costume—particularly when actual East Asian women wear traditional clothing clothing, we’re disrespected, othered, or made to feel unsafe—but it perpetuates exoticism, fetishization, and ultimately violence against East Asian women. 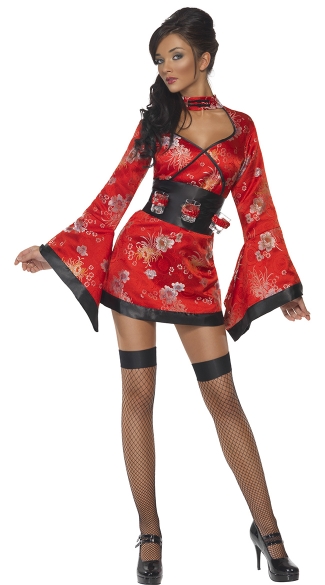 (As another note, I can only speak from the perspective of an East Asian women. I want to recognize that other Asian women and their clothing are hypersexualized and fetishized as well, but it’s not necessarily my place to speak on those issues.)

The hypersexualization of East Asian clothing and hypersexualization of East Asian women go hand in hand. Just the clothing itself evokes the stereotypical associations that come along with being an East Asian woman. Don’t believe me? Consider why the sexy qi paos or kimonos or pieces influenced by these garments are commonly worn by non-Asian women. If they wanted sex appeal, they could’ve worn any other lingerie or literally any other non-Asian article of clothing. To them, East Asian clothing offers an opportunity to be sexy and different, to distinguish themselves from other typical “sexy” clothing— it’s cool, it’s alluring, it’s exotic.

They want to wear our garments because they want others to recall the imagery, the popular portrayals of East Asian women.

Now, consider what that does to East Asian women. This cultural appropriation reinforces the stereotypes and assumptions about East Asian women. We are considered outsiders, told to go home unless someone finds us or our clothing sexually attractive. Then, we’re a bangable outsider. Our clothing and our bodies become sexual objects for non-Asian gratification.

Who deals with the aftermath?

Certainly not any non-Asian woman.

I do. Me, my sisters, and the millions that look like us.

Non-Asian women will take the cheongsam off the next morning, but we must bear the weight of sexual stereotypes that have and will linger for much longer than they could possibly imagine.

They will never know the feeling of being cornered by men inquiring about the tightness of your vagina or experiencing the violent assumptions of submission or wondering if your partner is only with you because of a fetish that is rooted in imperialism, hegemony, and racism.

Perhaps most frustrating of all, they will never realize how they normalize objectification and violence against Asian women.

So, as October 31 draws nearer, here’s a simple checklist for non-Asian people to consider when deciding your costume, made by yours truly: