Out on the Steps: Lessons Learned While #WaitingForLyle 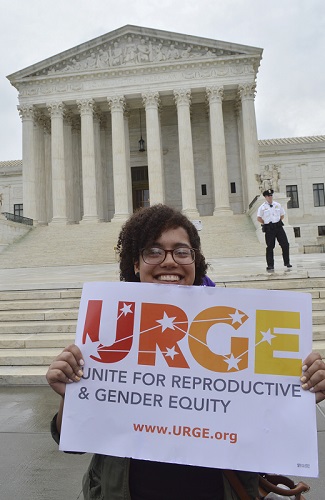 The Supreme Court has always been my favorite branch of government. They get to wear cool robes. They’re all really smart. Their work has always seemed quasi-secretive yet life-changingly important. When I was told that part of my URGE intern duties would include waiting for the Whole Women’s Health decision on the steps of SCOTUS, I was thrilled.

I was less thrilled when I spent two days on the steps #waitingforlyle in typical Washington, DC summer weather. There were more people there than I’d thought there would be, the majority of whom were anti-choice protestors, and the part of me that hates confrontation demanded to know why I had placed myself in this situation.

I stood for a few hours, feeling less anxious as the crowd grew larger. I don’t think I’ve ever met anyone as nice or genuinely empathetic as the men and women standing in the plaza with me . They made me feel like we were all in it together and nothing calms me down quite like genuine camaraderie.

The opposition on the second day was more obnoxious than it had been on the first, and all of the anxiety I’d had returned. Was this really where I wanted to be? What exactly was the point of my presence? Everything was too loud, too volatile, too much for me.

I was thinking all of those things when a woman handed me a megaphone.

So I did. I ran through our crowd screaming, “I BELIEVE THAT WE WILL WIN,” and the answering shouts of the people around me reminded me what I was there for, who I was there for. The decision wasn’t announced, but I was proud of myself, and that was enough.

When I got there on that final day, it was an honest-to-god party. All the people I’d met before plus around 100 or so more were dancing around to Beyoncé and waving posters in the air. At one point basically the entirety of the pro-choice crowd was wobbling. I couldn’t feel nervous. I was having too much fun.

When we finally got the decision, the crowd around me dissolved into screams. People were crying.

I’ll admit here, that the moment didn’t hit me in the way it hit some of the people around me. I wasn’t crying. I was happy, but happiness in that moment was contagious. It was impossible not to smile.

It didn’t hit me until I was standing in line at Starbucks. I was on the phone with my mom, telling her the good news.

It feels so good to be a part of something bigger than yourself. I haven’t been lobbying for reproductive justice and abortion rights for a long time, but I stood in the rain and got up before dawn and shouted into a megaphone and danced on a stage and I can take solace in the fact that a percentage of this victory, however small that might be, is mine.

I know so many other people who weren’t on the steps with me that morning to whom this victory belongs; the wonderful Gloria Steinem Membership Conference attendees I met a few weeks ago, who marched up the steps of Capitol Hill to lobby for comprehensive sex ed; the schools who hosted Abortion Positive tours on their campuses in this last semester; and so many others.

Older members of this movement are in shock at this victory. It’s the most overwhelmingly pro-choice victory they’ve seen in years, the most impactful abortion decision made in decades.

As young people in this movement, our first victory was brilliant. Now, we have momentum. We’ve got hundreds of thousands of young people around the country catalyzed by fierce joy and newly realized power.

One Response to “Out on the Steps: Lessons Learned While #WaitingForLyle”