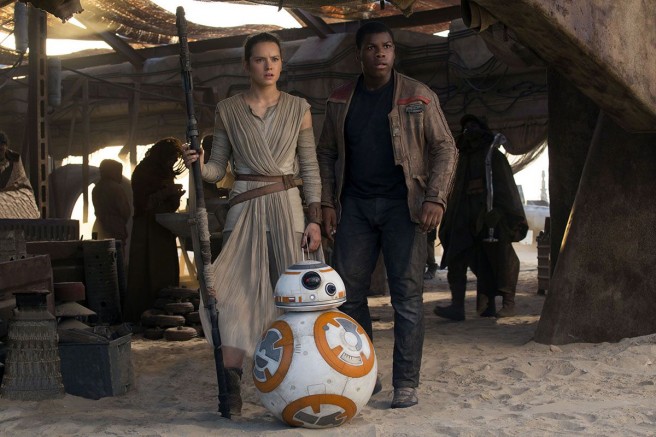 Warning: mild SPOILERS for the newest Star Wars film ahead

When it was announced that Disney made a deal with George Lucas to buy out the Star Wars series, I was worried. I expected Disney to warp it into the common princess/damsel in distress trope, but Disney and J.J. Abrams came through and created a female character with more depth than many major film franchises are afraid to give to their female leads, including the original Star Wars trilogy.

Not only that, but the cast chosen for Star Wars: The Force Awakens’s central trio is basically perfect and handle dumb questions like the one’s about BB-8’s gender (more correctly, lack thereof) with such grace. I also have high hopes for an open and repeatedly recognized gay relationship between a former Stormtrooper and Resistance pilot in the next two episodes.

Factoring in personal bias, Finn, the reformed stormtrooper, is my favorite character of The Force Awakens, but Rey, an abandoned, self-reliant scavenger, makes a close second if not just for the depth that her character was given. She’s naturally talented just like any other newly introduced Jedi in the rest of the series, but she is far from a Mary Sue. Rey is just forced to call upon the skills she has naturally as one of the force — the Jedi mind-trick, telekinesis — and those she’s need to survive as a scavenger like her physical strength and staff fighting. She is also given an emotionally distressing backstory that every good hero needs. As far as criticism on her ‘questionable’ realism on her ability to beat Kylo Ren with a lightsaber, it’s unfounded as transferring staff fighting to a lightsaber is more realistic than Finn, having only been trained using a blaster, having a fighting chance with saber.

Also, let’s make something clear, Finn and Poe, the Resistance fighter pilot that aids the duo in their adventure, have mad crushes on each other. Disney has the potential to use one of the most popular sci-fi and pop film franchise to give representation for queer men of color. That may not come to fruition, but for once, in this film the character that exists for audience eye candy is an attractive man rather than the trophy damsel in distress.

Being an internationally high-grossing movie with a long history and strong fan base, creating representation for women and men of color is most important for the new generation of Star Wars fans. I know when I was a kid growing up, I idolized Luke and not Leia for the same qualities that were written into Rey’s character. Newly minted Star Wars fans have a hero with substance in Rey, who doesn’t seem to possess the self-destructive personality that drove both Luke and Anakin to give into the dark side of the Force.