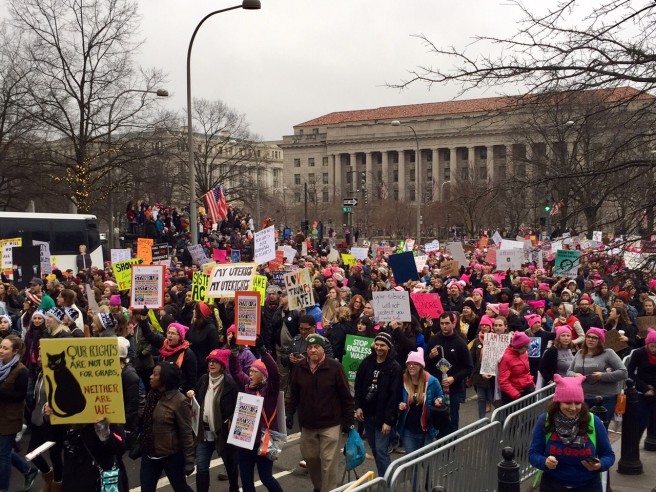 This year has really shown me the power of the white woman. In a matter of months, they have accomplished some very… interesting things:

Unfortunately, in spite of all of this burgeoning creativity, they have been unable to part with their trans-exclusionary (TERF) ways. As demonstrated by the Women’s March, if you want white women to show up and show out, the issue must be malleable enough to make it about them. If it can’t be made about white women’s genitals (and believe me, they will try), they won’t care about it.

Following Trump’s well-populated inauguration, thousands of people took to the streets to join the Women’s March. According to the mission statement on the event’s official website, the march aimed to “show our presence in numbers too great to ignore” and to “send a bold message to our government on their first day in office and to the world that women’s rights are human’s rights.”

In contrast to anti-Trump protests following the election, the organizers of the Women’s March insisted that the event was bigger than Trump. Co-chair, Tamika Mallory, stated that the march “is a continuation of a struggle women have been dealing with for a long time.” While the event’s official website and co-founders seem to have made, at the very least, a mild effort to remain aware that women are not a cis, white monolith, many of the protesters who joined them seemed to lack such awareness.

To put it plainly, a lot of the aspects of the Women’s March were deeply cissexist and transphobic. From the “no uterus, no opinion” signs to the “pussy power hats”, the event was dominated by language that forged a false connection between genitals and gender and harnessed power in vaginas, despite many of the women present not resonating with such expressions. Not only is this sort of pussy-centric activism very alienating, but also largely unproductive.

Defining women by their genitals, a core theme of misogyny, is paradoxically being marched against while reducing trans folks to theirs. The reality is that misogyny and cissexism are interconnected, so fighting one while reinforcing the other is counter-intuitive.

Often, when transphobia and/or cissexism are critiqued in pro-woman spaces, claims jut out that we want to eradicate gender empowering spaces or inhibit conversations about reproductive justice by being vigilant about language. However, despite how shocking this may be, it is possible to both have gender-empowering spaces and talk about reproductive rights without being cissexist. In fact, a lot of folks who attended the march managed to do both! Here are some tips:

1. Humanity first
Instead of making genitals the central focus of your activism, you can focus on your humanity as a whole. One of the downfalls of traditional reproductive rights is that it positions power as penis and oppression as vagina. Aside from failing to acknowledge other factors that inform power and oppression (race, class, ability, etc.), the penis/vagina binary and assumption of man/woman is often inaccurate. When you focus on your humanity as a whole, that includes gender identity along with other aspects of identity. Gender identity and histories rather than genitals, in this context, is more accurate in assessing power and privilege. To codify vaginas as oppressed and penises as powerful ignores the fact that many trans women and trans femme folks are attacked and even murdered because they may not have what is considered appropriate genitals for a woman.

2. Expand women’s rights beyond vaginas
Women’s rights are all things that impact women which includes immigration, police brutality, domestic violence, disability, etc. If your activism begins and ends with your vagina, it needs revision. The concerns of women are more than vaginas not only because not all women have them, but because there are other systems at play. Yes, abortion is important, but its hard to consider the inaccessibility of abortion when the fear of state-sanctioned violence wounds folks from ever considering families.

3. Use more gender neutral language
Instead of saying “If a man had a vagina…”, you can use a gender-neutral alternative such as “My body, my choice”, or “My body, my business”. While reproductive rights are under attack and women will be impacted to varying degrees, reproductive rights are an issue of autonomy, not just women. Furthermore, many of the issues considered “women’s issues” also involve some afab (assigned female at birth) trans folks who aren’t women. Hormone replacement therapy (hrt), anti-trans bathroom bills, affordable/free sperm banks are all issues of reproductive rights that may potentially be affected during the Trump administration and were before him. Making signs about autonomy is an easy way to express your discontent with governmental interference with people’s bodies without being cissexist.

4. Divorce gender from genitals (even when it seems impossible)
As reproductive justice is a major topic of concern, of course, talking about body parts and organs is essential. There is nothing inherently wrong with posters that picture uteri, but the problem comes in when uteri are embedded with more meaning than just being what it is: a reproductive sex organ. Instead of generalizing the experiences of all people, it may be helpful to de-contextualize some of the experiences, organs etc. from the meanings we apply to them in our society. : if you’re discussing puberty, instead of saying all women will menstruate, you can say some people with vaginas will menstruate.

Vagina-centric feminism is transphobic. Point, blank period. To have a march’s central focus, whether explicitly or implicitly, be on vaginas is not only essentializing, but alienating. If a clever sign with a witty remark takes priority over affirming and acknowledging trans folks, maybe consider why you support or attend these marches, And, in respect to trans folks, consider why your support or attend these marches. Are you marching with women or on them?