Whose Tale Is The Handmaid’s? 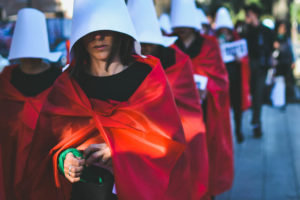 Fan bases can really take a TV show and kill the buzz surrounding it. People (white feminists) are dressing up like handmaids from The Handmaid’s Tale at protests and rallies in support of reproductive freedom. I don’t understand the message they are trying to convey with this look.  Frankly, it kind of irritates me when people buy these costumes to “make a difference.” They are mistaking consumerism for direct action.

This TV show is held in the eyes of many as the feminist-iest show around because of its remarkable relationship to real life. The first season came out around Tr*mp’s new “presidency” and the second season came out when the #MeToo movement surged yet again earlier this year. I can see why it would be easy to see this show as the new wave of resistance, but this white savior shit is old. The show is kinda relevant, but it is still missing perspective. I confess I am into this show. I watch it the same day it comes out on Hulu, but I have quite a few issues with it and some with the fan base.

This show proved to a lot of people that the government has the manpower and patriarchal mindset to take away any semblance of autonomy women had. They have and continue to allow attacks on women, and with the nomination of Brett KavaNAH this administration showed us that they want to escalate the war on reproductive freedom to the Supreme Court. It is horrific to think that beyond the challenges we face with the potential repeal of Roe v. Wade, we may also lose access to birth control, rights for immigrants and incarcerated people,  a sustainable environment and much more.

However, ignoring the fact that the government targeted and continues to target the most marginalized people in society to take away their reproductive freedoms is just gross.  The Handmaid’s Tale series would lead you to believe that the government focuses on targeting white women, rather than the black and indigenous women this country built it’s legacy of terror on.  The low income women of color of this country have suffered at the hands of the government.  This is why it’s ridiculous that these white women are co-opting this tale.  Yes, this could be a potential future, but they are literally commodifying the experience of black and indigenous women with these costumes.  Y’all thinking these boring, old, racist, white men in charge of our country know anything about this show or book?  Nah.  It’s really all for Insta, ain’t it?

Forced sterilization might be a part of our near future with Brett KavaNAH, and it was definitely a part of our past. My grandmother was forcibly sterilized by the US government.  She was given a copper IUD after the birth of her second child and didn’t realize until it pushed its way through her uteral wall years later.  This caused my grandmother complications for years that discouraged my mother from birth control.  This is old news.  Women all over the United States have been subjected to sterilization for decades. Even the woman that invented birth control only did it because she was elitist and racist.  The US hates poor women of color so much that instead of offering safe, legal, and reversible contraception it sterilized people against their consent and often without their knowledge because they passed sterilization laws claiming eugenics bullshit.  A third of the young, childbearing women in Puerto Rico were sterilized; in the 30’s, at the peak of sterilization procedures, Latinx women were 3x as likely to be pressured into signing away their reproductive freedoms. Hospital workers have stepped up and claimed that these women were pressured during or after birth, and often under anesthesia. In North Carolina, of the 8,000 women sterilized, 65% were black women which only made up 25% of the entire population. In 2013, it was found that nearly 150 women were illegally sterilized in California prisons between 2006-2010. This is still happening today; women are forced to choose between a longer prison sentence or a sterilization procedure.  Incarcerated folks are being targeted for forced sterilization because they are such a vulnerable population, since it is literally legal slavery.

Let’s bring it back to the Handmaid‘s fan base. A whole bunch of white feminists got super offended when a “sexy” handmaid’s tale costume came out a few days ago and had it taken down in a few hours. Funny how the racist Pocahontas one didn’t have them batting an eye. What are y’all offended by? This is a TV show, a book.  The thing that white women are afraid of has already happened to black and brown women. The government regularly stripped away reproductive rights from women of color. All of the outrage is directed at the “sexy handmaid’s costume” completely fails to criticize the capitalists who are willing to commodify literally any cultural product which they believe they can use to make a profit.

You can purchase and wear your outfits for the pictures at protests and rallies, but in the end that’s all it’s useful for, pictures. What does co-oping their story do for you or those that have been and will be affected? If you want to make a difference, make sure you and those you know are registered to vote. Make your VOICE heard because being seen in those red robes is a travesty.