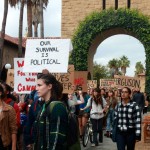 Black Student Union, Stanford organized a #BlackLivesMatter march/walk out in which URGE students participated in. Over 500 students participated and blocked two major intersections for 15 minutes. Afterwards, the chapter hosted a film screening of the Documentary “Out In the Night” which focused on the experiences of 4 Black, queer women facing sexual assault and the justice system.

It’s been about a week since Milo Yiannopoulos has been ousted from the conservative community. An openly gay man known for his blatant racism, and transphobia, Milo served as a bridge between the GamerGate crowd, and white gay people who refused to be held accountable for their oppressive ways. Milo’s rhetoric has been responsible for protests on almost every campus he has attended, along with violence towards college students, and those with marginalized identities. Milo firmly holds the belief that being gay is wrong and that political correctness is ruining the country.  However, it wasn’t Milo’s self determination to be the Worst Human Being In The World that got him dumped on the doorstep of the club he so desperately wanted to be a part of. It was his comments on relationships… Read more »

It’s Finals Week. Yes, the anxiety-inducing week where professors throw out all care for student’s mental health and we cram a semester’s worth of material down our throats. However, because my life seems to be plagued by a particularly specific brand of evil, not all my classes held finals. Some of them held mini end-of-semester lectures meant to show students “the big picture.” Today’s final was one of those. My teacher spent the better half of an hour telling us we couldn’t write and lacked passion. The second half however, he answered questions from students on a variety of topics. It was during this section of class that he uttered this phrase: “The most important issue we as a country must tackle next is the issue of the Black Man.”… Read more »

The Supreme Court Decision That Will Keep Police Violence The Norm

To date, 123 people of color have been killed by police in 2016. After the formation of the Black Lives Matter Movement and unprecedented political engagement from presidential candidates on conversations surrounding racial justice and criminal justice reform, the deaths of Alton Sterling and Philando Castile in such steady succession cuts to the quick. Our nation has become too comfortable witnessing state brutality against non-violent black people through the grainy footage of cell phone and soundless police dashboard cameras. We know the names of the 123 people who have lost their lives. We know what their families’ suffering sounds like. What we may not know is that, this past June, the Supreme Court made it much easier for these acts of violence to continue without legal consequences. With such landmark cases on… Read more »

On Monday, #BlackLivesMatter co-founder, Opal Tometi, spoke to students at Texas State University. Tometi, a keynote speaker for a series of talks Texas State University is hosting about diversity, spoke about her experience as a social justice advocate and activist. The event took place in the LBJ Ballroom on campus. The ballroom was filled with students and the event certainly yielded a good turn out. Tometi spoke about the systemic hurdles that our society, and countless others, have put in place, making it more difficult to attain true equality. She addressed institutionalized racism and global capitalism, two of the biggest factors keeping us from becoming a more just and equal society. Tometi then began her call to action. She stressed the importance of acting when we see racial and social injustices. We… Read more »

The Night I Realized How Much I Benefit from White Privilege

Trigger warnings: police brutality, racism, violence I have a 20-year-old hand-me-down car that I absolutely love. Its name is Flacco, after my NFL team’s quarterback, and it’s a ’95 purple Ford Thunderbird with a V8 engine that I might get a little carried away with on long, empty roads sometimes. Like any older car, it requires a bit of extra maintenance. Shortly before my grandparents gave it to me, they had a new engine put in. Fairly recently, I replaced the battery. Even more recently, one of my headlights went out. Unaware of this fact, I drove to the gas station about a mile down the road one night. On the way back, I saw the lights start flashing and heard the siren and for the first—and so far, the… Read more »