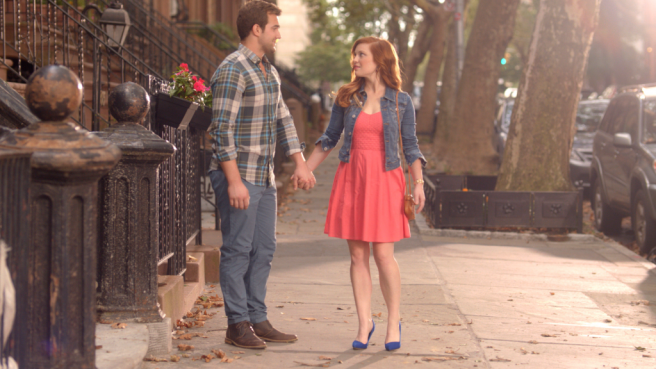 A few weeks ago, you released a trilogy of ads promoting the Co Zone, short for “condom zone,” in an effort to encourage couples to use a condom every time they have sex.

The commercials, which were created in a partnership with MTV, are meant to target Millennials. And in most ways, they do so very successfully. The ads show condoms as part of a happy and healthy relationship. Good on you, Trojan.

But they also miss the mark in something that is increasingly important to my generation: inclusivity.

I’m sure you already know this, but this specific campaign features a white-appearing, male/female couple.

Now, I’m a curious person, so this made me wonder: what’s the general demographic trend in contraception commercials?

I had to know the answer, so I watched as many of your commercials as I could find online.

Here are my findings: all of the commercials I watched showed a white-appearing, male/female couple. The individuals all seem happy, healthy, able-bodied, attractive, and at least moderately well-off in terms of socioeconomic status.

That’s what all these commercials have. As for what they don’t have?

Characters with varied racial and ethnic backgrounds, individuals from lower socioeconomic statuses, disabled couples, genderqueer folks, or people who might identify anywhere along the sexual orientation spectrum that is not heterosexual.

Why is this important?

By only showing a white, heterosexual couple in their ads, you exclude any individual who doesn’t identify as such.

Identifying with the person or persons they see in an advertisement might help convince a bystander to use that product—a phenomenon that is especially important to consider when promoting safer sex.

As a contraceptive manufacturer, you have a responsibility to advertise safer sex to people of all backgrounds, not just to focus on one demographic.

There are a lot of different ways to use condoms, and a lot of diversity in the couples, or individuals, who use them. As such, it would be incredibly easy to make a series of inclusive advertisements.

To make things easy on you, I brainstormed a few ideas to get you rolling.

You could show two women cutting up a condom to create a dental dam to use for oral sex. Consider advertising condoms for use with sex toys, either with a partner, or for solo sex.

Instead of using two white characters, perhaps showcase individuals who have different racial identities—black, Latina, Asian. Your ads could feature people with visible disabilities. Characters could have a gender expression that is outside the binary.

Not to mention, the audience that you’re appealing to with these particular ads—namely white, heterosexual, middle-class individuals—most likely already have reliable access to healthcare and contraceptives.

It’s likely that they received some sort of sexual education, whether in school or otherwise. They’re more likely to be insured, and more likely to have the funds necessary to purchase safer sex materials like condoms.

On the flip side, the CDC’s 2012 Sexual Transmitted Disease Surveillance reports that racial and ethnic minorities face higher poverty rates, unemployment rates, and high school drop-out rates. These are all factors that might affect contraceptive access and condom use.

These are also reasons why we should seek to include these groups in safer sex campaigns.

Some racial or ethnic minority groups, and men who have sex with men are also at increased risk for disease, according to the report. As such, it would make sense to market condoms, which, as I’m sure you know, are contraceptives that act as a barrier method to protect against disease and infection, to these groups.

If you want to take it even further, we can also look at the medium that these ads are running on—namely in TV slots and online.

This means that people who do not have Internet or television access are less privileged in terms of receiving this safer sex message.

The bottom line is this: there’s a disparity in who you should be marketing safer sex to and who you are actually promoting it to.

According to The New York Times, Bruce Weiss, vice president of marketing for the Trojan brand, said that if this campaign is successful, we can see other versions with a same-sex couple.

But Trojan, how do you expect this campaign to be successful if you’re deliberately excluding so many diverse groups of people?

Sure, this new ad campaign does a great job of normalizing condom use and appealing to a younger audience. But until that audience is inclusive and appeals to people from all walks of life, safer sex for all will be an unattainable goal.

So please, Trojan, consider adding some diversity to your future advertisements. I’m a big fan of your condoms and I’m sure many other people would be too, if only you were advertising to them.