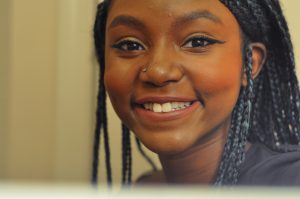 Major: Business and Studio Art with a Film minor
Hometown: Twin Cities
Favorite Writer: Khaled Hosseini!
Favorite sex scene from a movie/TV/book: I think my favorite is the scene from Season 8 of Grey's Anatomy where April and Jackson just beat up a really mean guy and are celebrating and feeling on top of the world.
Hidden Talent: Fishing!

The Ecological Footprint of Aunt Flow

Yesterday I learned that every piece of plastic created since plastic was invented (that hasn’t been burned) still exists in some form today. I never really thought about plastic in an introspective way until I was in middle school and stumbled upon Ramin Bahrani’s short film called Plastic Bag, which depicts life from a plastic bag’s point of view. This breathtaking eighteen-minute film narrated by Werner Herzog beautifully illustrates the realities of the Pacific Trash Vortex and the harm a single plastic bag can do. And what I didn’t know until watching it was that plastic never really biodegrades and actually roams the earth and the oceans, even after breaking down into smaller and smaller pieces. In fact, these pieces of plastic are so small that they are often mistaken for food…. Read more »

People all around the world have been using essential oils for centuries and their endless healing qualities are no secret to the earth. However, in modern day, there seems to be an increasing aura of skepticism and an onslaught of stigmas associated with natural remedies and forms of healing like crystals, aromatherapy and meditation. The first uses of essential oils trace back to cave paintings in France depicting the use of medicinal herbs, as well as in Egypt, which was a major hub for incense, perfume and aromatic oils.  During this time, the use of aromatic oils took on a very religious undertone. Hippocrates, the father of medicine, brought to light the health effects of 300 plants and spent a lot of time highlighting the utilization of natural remedies to… Read more »

Why Adulthood Doesn’t Have to Be a Trap

In my last month of being nineteen, I have heard many times that, “adulthood is a trap”. I have seen it on t-shirts and read it in books, and even heard it in conversation: growing up seems to come with this unsettling, shocking feeling like suddenly, no amount of time will ever feel like enough. Being in college has also paved way for a large wave of baby fever. A lot of my friends have asked me what I am going to name my children, how many I want, and if they’re going to play piano or guitar. I always feel really excited for them when they talk like this, but inside it’s always a scary, sometimes sad, prospect to consider—the possibility that five, ten years from now, life will… Read more »

Environmental justice takes shape in many forms, but it is often not taken as seriously as other human rights issues. Here are three instances where environmental justice meets reproductive justice. Toxins Because many low-wage workers are women and people of color, they are often exposed disproportionately to toxic chemicals in the air. This includes chemicals used in hair and nail salons, home cleaning products and agricultural pesticides. These toxins are known for causing a slew of reproductive health problems. What is commonly called the Toxic Trio are the chemicals formaldehyde, dibutyl phthalate,  and toluene, which are three notoriously harmful chemicals used in nail salons. These chemicals vaporize into the air and can cause many health problems for those that inhale them. Formaldehyde is used as a “nail hardening agent”, dibutyl phthalate… Read more »

The other day I passed a field of pinwheels twirling silently in the Georgia wind, representing solidarity for human trafficking. Atlanta has one of the highest national rates of human trafficking in the country. The thriving, infamous city is also home to one of the busiest airports in the entire world, which is one reason why it is such an easy target for human trafficking. Being in Atlanta for college has really made me realize the impending nature of this social justice and human rights issue. There are so many organizations and on-campus clubs dedicated to anti-sex trafficking as well as many events focusing on it. Human-trafficking campaigns are unique in that, so much of the time you cannot see what is happening—this is to say that sex trafficking usually… Read more »

“Praying” was released on August 15, 2017, at the dawn of the #MeTooCampaign. The song comes from Kesha’s album, Rainbow, and is an emotional gospel to healing and recovery. In light of recent movements combating sexual assault such as #MeToo, Kesha’s song is arguably one of many anthems for the campaign. In my women’s studies class, my professor told us that, because of patterns in history surrounding controversial presidencies and social resistances, the Trump presidency would likely cause some unspeakable pain and violence, but would also spark an artistic revolution from the flames of destruction. It is safe to say that this artistic revolution is well on its way and many artists are seeking to express their social resistance through their artwork, using paintings, photography, spoken word and music. Music in protest of the… Read more »

SALMA TOO: WHY ‘ME TOO’ SHOULD NOT HAVE AN EXPIRATION DATE

This year has allowed a surge of sexual assault stories to surface and finally see the light of day, after years of silence. With not only the horrific actions of Harvey Weinstein, many other victims have shared their stories in confidence and solidarity with the public. The #MeToo hashtag has provided a breeding ground to showcase how often sexual assault actually happens and more importantly, how often it goes unnoticed.  Harvey Weinstein has further proved that sexual assault in Hollywood has been going on for years, with many people turning a blind eye or suffering in silence.  Yesterday, The New York Times released a heart-wrenching op-ed piece by Salma Hayek. Known for her incredible work in several films, in this piece Hayek focuses on Frida, carefully fleshing out a detailed… Read more »

It is no secret that now is a very stressful time to be alive. Finding ways to cope with that stress can be really crucial to one’s well-being and longevity. The benefits of meditation exist in abundance, ranging from stress release, increased self-awareness, lower blood pressure, better health and concentration as well as a serious increase in quality of life. Meditation helps millions of people manage depression, anxiety and insomnia. From yoga to qi gong to tai chi, meditation also explores a vast platform of relaxation and helps us tackle the everyday hustle and bustle of life by introducing a deep sense of inner peace and balance into our lives. In other words, it’s quite literally a godsend. What can be so easily forgotten in the murky midst of hard… Read more »

Black Women Do Not Have to Be Strong All The Time

This past week on How To Get Away with Murder (04×06), Annalise Keating (Viola Davis) delivered another jaw-dropping monologue (2:30-3:06), debunking the “strong, independent, black woman” trope commonly seen in many books and movies–the very same trope that is often used and co-opted by non-black people as a joke. I have never seen another television show do this and I was completely floored. In this scene, Annalise is having another meeting with her therapist where she seems to be better at his job than he is. She interrupts him as he tries to use textbook tactics to get her to understand the depth of her own pain. “No, STOP. I’m opening up like you want me to and you keep steering me someplace… to get me to feel something, that… Read more »

When we were younger, my sister and I would call menstruation, “The Thing.”  In a similar way, society seems to have a huge problem addressing ‘taboo’ topics for what they are. And in this case, I’m talking periods. Although not all those who have periods are women, going to a women’s college has given me a unique privilege of noticing how ashamed and secretive many people are about their periods. While some people embrace them and joke about becoming blood sisters with friends or throw moon parties for their sisters, others hide their menstrual pads in shame and make a bolt for the nearest self-check-out line on heavy flow days. I truly cannot remember how many people have told me the age old story of their male teachers asking why… Read more »