Three Takeaways from the Biggest Abortion Case of Our Generation

#DearDebbie, I must inform you that you have recently committed one of the deadliest sins against millennials by calling us complacent. To us, “complacent” is a synonym for “lazy,” “entitled,” and “apathetic.” None of which are true descriptions of our generation, but are all a part of the “millennials-don’t-do-shit” dialogue that is often used to silence and discourage young adults. This myth of the “complacent youth” is one that we hear time and time again. We’re used to hearing it from our opposition, so pardon us, when we get aggressive hearing it from someone who is supposed to be right on board with fighting the good fight with us. This rhetoric is harmful. When used by our opposition, it is a manipulative tactic used to discredit us and take away… Read more »

Last year, I found a woman bleeding through her dress at a gas station 20 minutes from where I live. She asked me for a ride to Winn-Dixie, where she proceeded to tell me about all the terrible things her family had done to her and how it had left her with STIs she couldn’t cure because she can’t afford to get anywhere in town, let alone pay for repeated visits to a doctor. And that’s not to mention the children her marital rape left her with — children she could neither afford to care for, and whom she deliberately punished for being the result of her husband’s abusive attitude (note that this is not the norm). She lamented the fact that she could not get an abortion, but did… Read more » 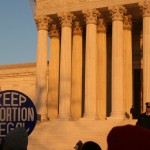 In 2013, Texans, yet again, had to endure other people making decisions about our bodies for us. When I say for us, I don’t mean to benefit us, I mean taking the decision out of our hands and the right to our bodies away. Wendy Davis fought for Texans in her pink tennis shoes and famous filibuster, unfortunately, HB2 was still passed in Texas. All clinics were required to meet ambulatory surgical center standards and abortion doctors were required to have local hospital-admitting privileges. The local requirement means a hospital within 30 miles and Texas is huge. There are rural areas all over this state. In 2012 there were 41 clinics open, if HB2 becomes fully implemented, only ten clinics will remain. Ten. Let that sink in. Everything is supposed… Read more »